I sit here now in Grand Rapids, Michigan, after what has been a rather "eventful" day.  It started with a very early morning flight, which was delayed due to mechanical trouble, which turned my 90 minute layover in Dallas into a 13 minute layover and a mad dash to get off the plane, get onto the SkyTrack train, get to my gate, and while gasping for breath answer "yes, I'm Michael Larsen, I'm here, please don't give up my seat" I now sit in a hotel room waiting for the logistics of the upcoming weekend and majority of m=next week to take place.

Since 2011, I have been a member of the Board of Directors with the Association for Software Testing. On Wednesday, we will read off a new list of board members, and for the first time in four years, my name will not be one of them. I explained why this was the case a couple of months back, but it's becoming much more real now. This CAST in Grand Rapids will be a "last hurrah" of sorts.

First, I want to say that I have enjoyed my time in this role, but like all things, I believe it is important that others step up and that those of us who have been here awhile be willing to step aside. The organization has new challenges and it deserves new energy from new players.

There are several great candidates vying for positions on the board. Currently, we have seven people running for three seats. That's exciting to see, because it means several people want to make a difference. It's also bittersweet, because it means four excellent people will not get to serve this year. to those who do not make it on the board this year, I heartily encourage you to run again.

I've often joked that being on the board is a bit like being in the military during war time. Most of the time, there are low level details that always need to be taken care of, punctuated by moments of high excitement and, often, accompanies by sheer terror. Fortunately those moments are only occasional, but they do happen.

Ben Yaroch posted a tweet today that really does draw the distinction, both of what is required, and why I feel the time has come for me to step aside:

There's lots of great ideas. We've had many of them. Great ideas by themselves, though, don't accomplish anything. They need people ready, willing and able to roll up their sleeves and do the hard work. I don't think there has ever been an issue with the willing. Ready and able have proven to be genuine challenges at times.

There have been some great blog posts from several of the candidates as to what they hope to be able to do to help AST meet its vision going forward. I encourage everyone to have a good look at the candidates and see what their proposals are, and how their proposals can help shape and even change what AST is and does. Note that the Board is not made of of people that tell others what to do. When you decide to run for the Board, you are saying that you ware willing to roll up your sleeves and be the one "doing the doing". Often, that can be more difficult than it sounds, and progress can be very slow at times, but if persistent, it can and does happen.

Pete Walen wrote an open letter to the board candidates and members of AST, and rather than try to repeat what he said, I'm going to just quote it here, as it's exactly my sentiment as well:

"When considering the candidates for Board positions this year, look at the candidates’ Biographies. Read them carefully. Google them. Google their organizations. If you are at CAST, look for them before voting and chat with them in the hall. Ask them (in person or by email) “In what way will you do the things you said you want AST to do? How will you go about making that happen?”

Then look for the people with a track record of doing things. It is people who do things that we, as an organization, need leading us."

Posted by Michael Larsen at 2:58 PM No comments:

Learning Something "Sort Of" New

I want you all to meet a new friend: 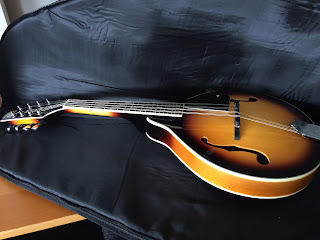 I've played guitar off an on since I was a teenager, and during my years of playing guitar, I cemented a lot of bad habits, but also learned some cool things along the way. I never managed to get proficient enough at guitar to make it a primary instrument, but I did learn enough guitar to be able to write my own songs and show them to other people. One of my great laments is that I never really learned how to play other people's songs. While I can fundamentally read music (I'm quite good at reading the tenor line in vocal scores) it takes me time to read out chords that cover two staves, and it slows me down a great deal. Because of my impatience, I pretty much abandoned trying to read music to figure out already written songs, in favor of using what I already knew to write my own.

A few weeks ago, I had the chance to meet and make the acquaintance of a musician who enjoys performing at various events. We met while interacting with a "living history crew" for a pirate festival. As part of our interaction with the encampment, we got together and worked out a few songs, him on guitar and singing, and me singing accompaniment and hitting a hand drum. The experience was a lot of fun, and we both decided we should put some more songs together for future events. I likewise decided I wanted to accompany on those songs, but since we already had a guitar player, I said "OK, then I'm going to buy a mandolin and learn how to play it, just so we can do this!"

With the first requirement out of the way (that of issuing a "bold boast") I set my sights on finding an entry level mandolin. Frankly, there are many different mandolins out there, ranging from $35 to $3500 and more. I certainly wasn't going to spend $3500 on what might be a whim, but I wanted to make sure I had something usable, reasonably playable, and something that I wouldn't be heartbroken if it somehow got damaged (considering this is going to travel to events that will likely be held in parks, on seashores, and on boats in various places ;) ). To that end, I picked up a Rogue RM-100A Tobacco sunburst mandolin. It feels good enough to play without costing me a lot of money, and if I feel I develop beyond what it offers, I can always upgrade later.

One of the things I am fond of saying when it comes to playing an instrument is that you are better situated to learning a second, third, or tenth instrument if you have already developed some skill at a first one. Each instrument is analogous to another one, and the skills you learn with one can help you learn another. In this case, my guitar experience is both a help and a hindrance. It's a help in that the fretboard dynamics are very similar to a guitar. Fret spacing is different, but the underlying idea is similar. It's a hindrance in that the strings are tuned in fifths rather than fourths, like I am used to. That means all of the chord patterns I learned on guitar don't help me play a mandolin... at least not in the same way. I'm not sure if this is just something I never considered before, or I never had a reason to examine it, but the fifths tuning of the strings on a mandolin (G, D, A, E) is actually the reverse of the fourths interval tuning of the sixth, fifth, fourth and third strings of a guitar (E, A, D, G). That means, if I look at the mandolin's string pattern in reverse order, then the chord and scale patterns I know from guitar actually do work. They aren't perfect matches, but they have been a big help to my remembering where on the fretboard I am, and what I am doing.

Too often, I think we take an experience we had before, and we think "oh yeah, this will be simple" or "oh no, that's going to be too hard". We rarely think "hmmm, I've had experience in one area, I'm curious to see how much of it will apply and how much I will have to initially learn or relearn to become proficient with this (fill in the blank)". For me, I have some interesting goals and challenges that just may help me:

-- the mandolin is an interesting sounding instrument in its own right, and therefore it will be fun to learn how I might be able to play it.

-- I already have a goal to learn other people's songs; it's unlikely I will be called upon to write new nautical sea shanties, but hey, one never knows ;).

-- I have three children who also play string instruments (violin, viola and cello). I can sit in with them and we can look over songs together.

One additional thing I am doing now, which may become annoying to some, is that I'm bringing it with me wherever I go. The reason? I want to be able to practice whenever a spare moment arises. Perhaps not sounding out the instrument, but at least practicing chords or fingering technique, or reading music and trying to see if I can place my fingers faster on the fretboard so I can improve my sight reading. Who knows where this will lead, but if perchance you happen to see me, and I have the mandolin with me, go ahead and ask me to sing ""Get Up Jack, John Sit Down!" or any number of other sea shanties and pirate appropriate tunes. I look forward to the challenge of learning them and, hopefully, performing and singing them well sometime soon :).
Posted by Michael Larsen at 11:52 AM No comments: