Aedificamus: Everything Works, Until it Doesn't

I started this little all consuming project on August 14, 2015. At the time, I weighed 263 pounds (yes, posts earlier stated I weighed 260, but the scale I was using at first and the one I use now have a three pound discrepancy. To be consistent, since I'm using the Health-O-Meter LoseIt Scale, I adjusted to keep the numbers consistent). I embarked on an approach that I tinkered with over several months, and for quite some time, felt I had come up with a winning formula. My results certainly seemed to confirm that line of thinking. I did offer a caveat that, what works at one point may stop working or be less effective later on.

First, let's look at the numbers: 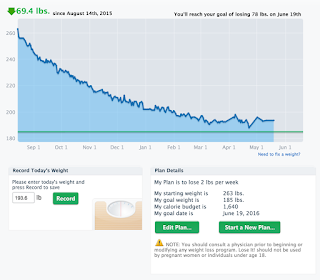 Yep, things have been interesting the past few months. In some ways, I feel like I am more active than ever. I'm focused on the food I prepare. I'm getting ready for what will likely be a challenging but fun two week long backpacking trip. I should have had this in the bag a long time ago, and yet...

Not only has progress slowed, at certain points it has stopped completely and reversed. Ups and downs and fluctuations day to day are to be expected, but this is different. Using a moving average, when all is said and done, I have been virtually parked at around 193 for three months. I got down to 190 for a day, and then later I reached 188 for a few days, but then rocketed back to around 194. I blamed it on a weekend at a scouting activity where my prime responsibility was cooking (and yes, cooking the fun stuff :) ). I also bring my culinary skills to a variety of pirate festivals (in addition to being a living history docent, I also act with the Quartermaster crew as galley cook, which, let's face it, is fun). Still, I've been keeping track of my calories, I've been diligent about syncing my Fitbit with my apps, and sure, there are some days I don't make target, but the high majority of the time, I do.

Data is interesting. If you focus on just one thing, it can tell you something specific, but it may not tell you the whole story. The image above deals with weight by itself. The following image, which is a graph of my Body Mass Index (BMI) adds another dimension: 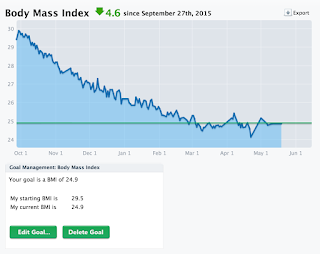 I'll be the first to tell you that BMI is a flawed measure. No two people are exactly alike, and I have some unique morphology that messes with the very premise of BMI. I have a classic Viking build. I often joke that my scant Danish heritage is really only represented in my name, as I am basically 1/8 Danish, with a full half of my heritage Italian and Spanish/Mexican, and the rest a mixture in various parts of English, Irish and Welsh. For those who are fans of history, you probably already jumped to the point where you would say "yeah, but there's lots of Danish/Scandinavian in that mix of English, Irish and Welsh... that's who the Saxon's were", and you'd be right. Long story short, classic Viking morphology defines my body. I have broad shoulders. I have a long torso. I have a long neck. Most important, I have stubby legs. I'm 6 feet, 2 inches, but I have a 31" inseam. A typical height for that inseam length is about 5 feet 10 inches, so four inches of my cross section are coming out of my torso. There' a lot more mass in the torso than in the legs, all things considered. My point being, just getting to a green zone BMI may or may not be a proper target, but since hospitals and the insurance industry use it, and pretty heavily, for making health related decisions (and assigning risk factors), I abide by it. I hit 24.9 BMI (the highest I can be and still be in the green zone) on February 27, 2016. The green line in the graph represents that 24.9 goal.

Do you notice anything interesting? Yes, there are dips, even some significant ones, and there are setbacks (yep, a significant pair of them as you can see), but overall, when averaged out, I'm holding altitude at that 24.9 spot. This is, I assure you, not intentional. I really want to hit that 185 target I made for myself, but my body has been fighting me tooth and nail... or has it?

What's different between now and what I was doing in the Autumn of 2015 and the Winter of 2016?

One interesting variable change is the addition of the FitBit into the equation. It's a really neat tool in that it tells me my caloric burn for each day, and it tracks steps for me. However, I have noticed something interesting. Back when I was using my phone as my pedometer, it seemed to take me an hour and forty minutes of cumulative walking to get to 10,000 steps. I stopped keeping track time wise or distance wise, but I've had the nagging suspicion that my FitBit may be a little too generous with my step count. It certainly seems I hit that value much sooner. It's also possible that my phone registers the distance differently, and since I started wearing the FitBit, I don't carry my phone with me everywhere all the time, so I can't compare the two values in a meaningful way.

Additionally, I've been training for a two week backpacking trek, with conditioning hikes covering five to seven miles, with elevation climbs of about 1,000 feet up and down, with a 45 pound backpack. Seems I should be losing weight left and right with that kind of regimen, except... now that I'm doing these long hikes, I have had mornings where my typical physical training sessions, be they yoga or strength training stuff, have diminished. Also, I've been producing a podcast that takes up a fair amount of editing time, so a lot of my previous exercise focus has been shifted. In short, while I want to say I'm doing the same thing I was doing before, the truth is, I'm not. I've changed the load, both physically and cognitively. I may not be getting all of the exercise and calorie burn I think I am getting.

Yeah, but my food regimen has been rock solid, right?

Well... I can go back and see a whole bunch of things that, if I were to be 100% objective, I thumb ruled and used experience to provide numbers. Did I include the pat of butter that went in to lubricate the pan? How about the salt used in the blanching process? Did I really know the make-up of that rice noodle I used? When I eat out at a Mexican place and get ceviche, do I really know the caloric breakdown of what I have eaten? Have I truly been making my own meals, or have I slowly worked in social lunches at the office to help balance things? Sure, I hit my fruits and vegetable quota religiously, and have for months, but there's a lot in the mix I am probably not accounting for, or I am willfully ignoring. In short, I may be eating more than I am giving myself credit for. Mix that with a changed workout regimen, a possibly overgenerous accounting of my thermal output, and a very real underreporting of my caloric intake, and I think it's very possible that my lack of progress is my own darn fault.

Additionally, it's also entirely possible that I've biased myself by having hit the BMI target. It's not the weight goal, but it's put me in the green zone for healthy weight, and perhaps my sub-conscious is saying "OK, body, that's enough, we need to overrule this darn fool, by whatever means necessary."

There's one final detail I think may be important, and that's time. Time using a caloric budget. Time planning workouts. Time going out of my way to train. Time avoiding certain foods or food combinations. Time researching alternatives to help me lower sodium or excess sugar. All of this adds up, and results in "Weight Loss Fatigue". Yep, I'll admit it, some days, I just want to say "the hell with all of this!" It manifests itself some times in my going days without weighing myself. I'd been an advocate of daily weighing and found the daily fluctuations to be a wonderful source of daily angst, so I cut them back to once a week. Problem is with once a week, I'm not getting that daily feedback or getting the motivation to course correct. Holding ground isn't so bad, but it also makes me a little complacent. Having a spike in weight makes me less want to weigh daily. Therefore, even though the daily weigh-in irritates me, it really does give me daily input that I can act on, so I'm going back to it, or as daily as I can realistically do.

It's easy to lament a lack of progress and think "oh, things have just gotten so much harder, I'm doing the same thing and not getting results any longer". It's possible that could be the case; the body is highly adaptable, and I could be developing muscle from all my exertions, but with a reduced calorie load, I'm highly dubious. No, I think the real facts are that I'm not doing the same thing. I've drifted off my course and routine. I'm not as diligent as I was. I'm using the tools to provide a false sense of accomplishment. I'm getting a dose of dopamine each time I meet a goal and see the bar and icons turn green. That in and of itself is its own reward, and it distracts from my ultimate goal. To that effect, it's back to some of my tried and true methods. An hour and forty minutes daily walking time, measured some other way than just letting my FitBit tell me. It's time to get back into those FitStar workouts that I've let become less frequent. It's time to say "no, thank you" to team lunches, or at least go less frequently, and take my cooking and food preparation back. Mostly, I need to really take the time to think about what I ingest (and more importantly, digest), and realize that there may be lots of hidden stuff I'm not accounting for, but I better figure out how.

So there it is, nine months in, almost seventy pounds down, but those last eight pounds are proving to be frustratingly difficult to say goodbye to. Whatever the reason, what I relied on before isn't working the same way, so it's time to pivot. Check back in a couple of months and we'll see how well I do with that ;).

Posted by Michael Larsen at 12:32 PM No comments: