Where Does that Highway Go To?

It's that time again, the end of another year. With it a chance to reflect on some of what I've learned, where I've been, what I could do better and what I hope to do going forward.

This year has been a good one for the Testing Show podcast. In the software testing world, outside of the work I do each day, I would say that this has been my most consistent endeavor. I've been pleased with the episodes we have done this year and I am excited about more episodes that will branch away from the typical topics that we normally cover and aim to strike out into other areas that are important to software testing but may not be solely focused on the testing aspects alone. Also, as it will go live in the middle of this week, I can say there will be one noticeable change. New theme music will be part of the 2018 series of shows.

In my workaday world, I had an odd situation that required an adjustment and a change in work habits for me. I started the year with just a handful of people coming to our office to work each day and quickly that changed into my being the only person coming into the office most days. I felt a bit like the lone lighthouse keeper much of the time, though of course, the team communicated regularly through digital means. This year, as I was the one person coming into the office, our parent company decided it didn't make much sense to pay for a large office space that only one person was using. The office was closed and I was transitioned to being a 100% remote worker. This is a first for me. I've had the option to work from home much of my career, but it was a couple of days a week. I've never worked in an arrangement where I was 100% at home, all the time. That's been my reality since October of this year. I'm adjusting, but I do have to say it still feels a bit strange.

On the family front, my son moved away from home to embrace his dream of being part of the music industry in Los Angeles. I'm proud of him for chasing after his dream, but part of me is way too familiar with the entertainment industry and its many promises made but so few kept. He sends me texts that remind me of myself at his age when I was sure I was going to conquer the world. I have to fight the desire to tell him I know that tone so well, but in truth, I don't know his reality. I remember mine. Therefore, I do my best to hold my tongue and just let him tell me what he is doing and keep the peanut gallery comments to a minimum. It's hard, to say the least. On the bright side, he's more interested in the production and marketing end of entertainment, not being the actual performer, so he has better odds than I had ;).

On the physical front this year, as I tested out a variety of fitness approaches, trying to maintain a target weight and chasing metrics to define quantitatively how physically fit I was, I came to some stark conclusions. Numbers are artificial, they can be gamed, they can be detrimental to long-term success, and most importantly, it's entirely possible to "be fit" and feel completely miserable. That was a conclusion I reached this summer. Yes, I was 194 pounds, but I was also anemic and unable to donate blood, I felt tired much of the time, I got sick more frequently. I allowed myself to put a buffer between that lower point and I voluntarily gained back 20 pounds. Since around November, I have hovered between 215 and 225 pounds. It doesn't sound as dramatic, but it sure feels a lot better. In 2018, my goal is to focus more on body composition and worry a lot less about my actual weight.

Some longer-term initiatives I had to decide that I didn't have the energy or ability to do as often. Weekend Testing Americas is still a thing, but I found myself repeating where I'd been before and decided it was better to step away for a bit. I haven't shut it down, but I determined I needed to let some new blood take a shot or let it lay dormant for a bit. I'm feeling like I have some fresher ideas now, so do not be surprised if you see more Weekend Testing Americas sessions in the new year.

On the speaking front, I have kept my pledge to focus on Accessibility and Inclusive Design as my topics of choice, and those will also carry over into the new year as well. As I get older and I discover that my resiliency and "springiness" isn't what it used to be, many Accessibility and Inclusive Design aspects that were at one-time talking points have become "living points" for me. As such, the lack of sites that follow guidelines and the limited testing being done to help sights be more inclusive matters more to me now than ever. Additionally, I've decided that I want to do some more writing on the topic in 2018, with concrete and specific actions people can take.

As my company is making moves to modernize many of their testing frameworks, I'm taking advantage of the changing landscape to try to learn more about setting up a new framework from the ground up. At the moment, I'm championing an approach that uses Angular, Protractor, and Jasmine over our older successful but decidedly proprietary setup. Our testing team has decided to try a number of experiments and see where they lead us, rather than going all in on a particular strategy. To that end, I aim to learn a bunch of things with this approach and I also aim to talk about it as much as I can. This blog has been lean on my "learning in public" experiments as of late. It's time I got back to that.

My thanks to everyone who has worked with me, interacted with me, been part of The Testing Show podcast as a regular contributor and as a guest, shared a meal with me at a conference, come out to hear me speak, participate in a Weekend Testing session, shown support to the Bay Area Software Testers meetup, and otherwise given me a place to bounce ideas, think things through, and be a shoulder to cry on or to just hear me out when I feel like I'm talking crazy. Regardless if you have done that just a little bit or a whole lot, I thank you all.

Here's wishing everyone a happy, healthy and sane 2018. I look forward to talking with you all in the new year and beyond. Also, thank you, Talking Heads, for the song "Once In A Lifetime" as it has provided me so many clever titles for my year-end posts these past seven years (well, I think they are clever; your mileage may vary ;) ).
Posted by Michael Larsen at 5:52 PM No comments:

The Testing Show: Hiring and Getting Hired 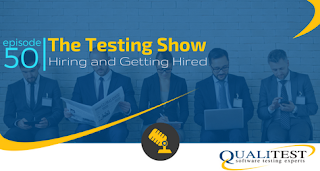 It's been a big year for The Testing Show and this is the last episode of the year that is 2017. We were happy to have Gwen Dobson join Jessica Ingrassellino, Matt Heusser and me to talk about the changes that have taken place in the testing market over the past few years.

We riffed on a number of topics including the laws that prohibit asking about salary histories, having that discussion about money and making the best case for your worth, marketing your skill set and leveraging the variety of platforms at our disposal to help sell ourselves and our personal brands.

It's been a great deal of fun to produce and participate in this podcast and I'm looking forward to the new topics and guests we will have in 2018. I am actively working on a two-parter for January with a special guest that you are just going to have to wait and see/hear who it is, but I can say I've wanted to interview this person for a long time and I'm excited about presenting these episodes, along with some other changes for the show in 2018.

With that, please jump in and have a listen to
The Testing Show: Episode 50: Hiring and Getting Hired:
Posted by Michael Larsen at 9:08 PM No comments: