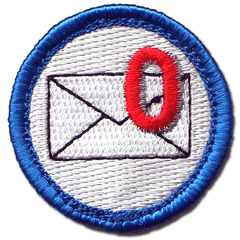 Merlin Mann is a point of inspiration for me in many ways. I like his philosophy, I like his approach to dealing with things, and I like the fact that he’s willing to admit that he’s not always really good at doing the things that he espouses, and that he is honest and open about that fact. In short, Merlin recommends a lot of the things he does not because he is really good at them, but because he is oftentimes really bad at them and wants to get better.

The idea probably most synonymous with Merlin is “Inbox Zero”. This is the idea that, every day, we should go through and sweep our email, text messages, etc., whatever it is that we use to stay up to date on things, and everything should be processed, either first thing in the morning or last thing close of business, take your pick. More to the point, it's not the number of messages, it's the percentage of your brain that's in your Inbox. Inbox zero really means "nothing left in the air, everything has been dealt with in one way or another".  It seemed brilliant, it seemed like a perfectly sound idea, and I admired it for three years… and then, just this past week, I put it to the test.

Wait, I’ve admired an idea and three years later started using it?! A little slow on uptake are we? Well…yes, it seems. It’s taken me a long time to realize that I’m an email hoarder, with a byzantine system of storage and tracking and nesting and up until last Wednesday, an Inbox that had 3000 messages. WHY?!! Simple truth is, I was going to get to it later, after I dealt with the messages I was waiting to get to, which meant I frequently forgot about messages, which meant I often had a flurry of new messages to remind me of the old messages, which meant I had to file, sort, shuffle, and reconsider what I was going to do…and on and on and on, ad infinatum ad nauseum.

Part of me wanted to declare email bankruptcy, just say “heck with it and flush them all”. However, I realized that was just dealing with a symptom, it wasn’t getting to the root of a problem, which was that I was letting things hang around as some weird self-validating trophy of who I was and thought I was. Merlin has stated numerous times, and I really believe this, that we often use our Inbox to decide who we have to be on that day. Much of it fit certain categories; newsgroup discussions I valued (and were archived elsewhere), access codes for services (which really didn’t belong in email anyway, talk about a security issue), receipts (again, don’t really belong in email) and past plans and agreements (which, upon further reflection, I may have looked at 10 messages again over the past 3 years). The final grouping was the most important, but also the one that really deserved better treatment… ongoing and active work. The point is, there are better ways to manage this stuff. An email Inbox should not be the place.

With this, I made a decision. How about we give Inbox Zero a try, and not just Inbox Zero, but as close to Email Zero as humanly possible? So here’s what I did:

• Reconsidered and revamped the byzantine folders. Instead of multiple folders for everything, now there is just a few with very general areas (testing, scouts, family, writing) and the idea that anything that's DONE is either archived or deleted (and by archived, I mean in a journal, not an email folder).

• Worked through and pulled out any and all “sensitive items”, and either moved them to documents or a spreadsheet so I could keep track of them in a “trusted system”. Once there, delete the messages.

• Dates, plans, appointments, etc., capture them in a calendar and then delete the messages.

• Blog about or Journal the truly valuable correspondence, or otherwise get that valuable information in a place where it was most relevant. Then delete the messages.

• Realize that Yahoo Groups has a storage mechanism for all messages. If I want to consult an archive, go there. Get it out of my email unless it’s actual "in process" details that I need to do something about right now.

With that, I achieved the zen state of Inbox Zero in three days, and I can say I’ve maintained it now for four. It’s an early win, and some may say not worth talking about if it’s that early, but I think it is, because here’s what my test has informed me:

• Reading email is way faster now.
• I’m much more likely to call spam spam and just delete it.
• I’m less likely to provide energy needed for other more important endeavors to scanning my inbox and searching my inbox for something that might be important.
• I deal with messages much more quickly and make decisions about them much more quickly.
• I’m very jealously guarding that Zero status in the Inbox. It was hard won, I want to keep it there.
• The important data points are now in places where they make sense and can be more quickly utilized and identified.

So is it worth it to go “Inbox Zero”? My preliminary findings say “YES”. Seriously, if for no other reason, see if the time you spend staring at email goes down as a result of doing it. I’m willing to be the answer will be “yes”. It certainly seems to be the case for me.
Posted by Michael Larsen at 12:57 PM

Good luck with that. A good To Do list manager helps. I didn't notice you mention that one. I've hit Inbox Zero quite a few times and stayed there for weeks at a time. It's joyful. It's liberating. I love it!

And, I currently have 1226 messages in my Inbox. Maybe I'll do some filing/archiving/deleting in front of the TV later tonight.

Funny you write this now. I've spent the past week reorganising much of my online life. Emails. Google Reader. Twitter. FB. G+ (ah hem). It was such a mess!

I'm not quite there at clearing things out every day, but have committed myself to reaching that very soon. Even when I have the baby in my other hand :)

Oh, and it feels good :) I'm producing so much more.

I've toyed with the idea of "cleaning out" my inbox for work, but couldn't do it. I tried it for a side-job I have and found myself actually more disorganized since I had things in all these different places (article to publish in a folder here, contact follow info in a list there, etc.).

Instead, for work, I re-orged my email filing structure and fully utilized all of Outlook's tools (tasks, onenote, categories, etc.) and found I was confident I wasn't missing something (I often need to reference old communications/docs), I knew where everything was, and anything unimportant didn't get organized and rolled out of my inbox (our work deletes anything sitting in your inbox after 90 days--a natural delete, if you will).

Anyways, I just find it interesting that email organization sometimes gets a bad rap in favor of organizing it in a different way.

@Becky, I do much the same thing, in that I am using a calendar and a task list to help me capture the things that are important. I just had *way too spread out a system. I'm not throwing everything away, I'm just organizing it differently (and taking advantage of the fact that email and web tools have pretty good search technology now.

@Rosie, I finally set up my Outlook so that I could have everything in one place and I could capture m ost of my emails from various locations (one account stubbornly resists, but that one I can manage independently.

@Rick, I in no way mean to impugn other people's approaches or am saying that Inboix Zero is a holy grail, but I have found that it really does make me think about where stuff goes and what I want to do with it. I too have to keep certain correspondence as a "proof" that something happened, so those are kept and also indexed. I just found that I was holding onto way too much stuff that was 90% irrelevant. I'm willing to re-train myself to better handle the 10% that actually matters, b ut yes, this is very much a "your mileage may vary" kind of thing :).

Oh, I wasn't trying to criticize you for doing what you're doing. Whatever works for someone, go with it! I guess I've just had a few too many people tell me to "clean out my email" (usually my local IT dept since my .pst and .ost files are multiple GB in size).

I don't ascribe to Inbox Zero, but I stay pretty much within 1 page of the inbox (about 50 msgs) typically. A lot of things like newsletters I have filtered automatically and read if I have time. Things like Job contacts, or family notes I may archive but not hit the inbox. The only things I leave in the inbox are things I want to act upon later.