I'm not entirely sure when it happened. I know why it happened. it was because I was dating a girl in college who had an interest in drawing and in all things folk magic and fanciful. She knew that I had a great love for Native American traditions and history. She handed me a graphic novel some time in early 1987, shortly after my 19th birthday. This graphic novel, I'd come to learn, was one of the groundbreaking movements in the alternative comics scene in the late 70s and early 80s. This "comic" was ElfQuest, and with it, I was introduced to an amazing world built from the imaginations of Wendy and Richard Pini.

These stories consumed me, and I read them voraciously. First starting with the original series of books (my girlfriend at the time had the four volumes that made up the original story) and from there, I discovered that there was a Marvel comic reprint of the series. I went to as many comic books stores as I could in town and surrounding cities, and over a period of several months, picked up all of the reprints. About this time, further stories started coming out from Wendy and Richard, starting with Siege at Blue Mountain and then, later, Kings of the Broken Wheel. By episode #2 of Siege at Blue Mountain, I knew I would follow this series wherever it lead, for as long as it lead. I wasn't much of a comic book collector, but this one just touched me, and made me want to get into it as deeply as I could.

For fifteen years, I followed the stories wherever they went. I followed the side arcs, the fragmentation, and suffered through a variety of artist who took over telling side stories and "alternative universe" adaptations. some of them I liked tremendously, but in many ways, I still loved it when a story arc or a plot line or a special was illustrated by Wendy. It was her series, and her original animation, that hooked me, and for many years, I held her as the gold standard.

Around 2000, the monthly publications one could find in the local comic shops stopped. Along with it, I had other interests. I had a wife and three kids by this time, and so I allowed the "collecting" to stop. Besides, many of the stories were going to be wrapped up online anyway, so I'd just move to see where they wen when they got posted.

Twelve years has passed since then. My older daughter, Karina, has had some interesting challenges in her life. One of them being that, at a young age, we discovered that she had strabismus, far sightedness and astigmatism. She's had to wear some pretty strong glasses for much of her life, and it has limited her world view, even with her glasses or contacts, to a dept of field about three feet away to about 25 feet away. Rather than be frustrated with it or get angry about it, she adapted to having a desire to work with things very close up. The net result is that she has become a very accomplished artist, and has become very good in a number of mediums. As she has had an interest in Japanese animation (fostered not just a little bit by her dad's interest in same), she's become accomplished in recreating many of the signature Anime styles. Still, she said that she wished there was something different, something she could see that had more expression, more variety, and more stylistic difference. It was with this that I smiled and said "hey, I think I have something you might like".

With that, I went into the boxes I hadn't looked at for several years, and in it were over 200 issues of stories, ideas, and inspiration that were being locked away waiting for... what? I had read these many times, but I knew them so well, I hadn't reached for them (or really needed to reach for them) in ages. So they sat in these boxes for... again, what? Was I hoping to sell them someday? Of course not. Was I waiting to reread them again? With the ability to see the series in its entirely online, why would I dig out the comics to reread them when online was much more convenient? Yet I realized that, in my daughter, here was someone who could appreciate them right here and right now. What's more, she didn't have an "attachment" to Wendy and Richard Pini in the same way that I did.  Thus, she could view the story from her own world view, and she could look at the other contributing artists from their own perspectives.

This is all well and good, but you all know this is TESTHEAD, and this is a testing blog, and there has to be a moral in here for testers somewhere, right?

Inspiration Strikes in Weird Ways - Had I not been dating my girlfriend at the time, it's likely I would never have come across this series. It amazed me for years afterwards how hard it was to find issues and how many places I had to look for it. It was an alternative title, and it was not really hugely produced. In fact, I still find there are two groups of people. People who have never heard of ElfQuest, and people who have not only heard of it, but love it and have actively proselytized about it to others. Ideas and concepts are ephemeral, and many things of great value only get passed on by direct word of mouth from one individual to another. Testing is much the same way. the obvious ideas don't always prove to be the good ones. Many times, the truly great insights come from seeking them out, and talking with individuals who have learned from experience what is valuable and what is not.

Don't Get Too Attached To a Way - For many years, I was a total Wendy Pini fanboy. I loved the amazing detail she put into her characters, and the stylistic choices she made. So much so, that I often recoiled when other artists drew side stories, and it diminished my enjoyment of their work.  As I was looking at these artists with my daughter, I refrained from making "fanboy comments" and she showed me some interesting techniques the other artists did, and how she thought their work was really cool. I had put blinders on, in a way, and those blinders prevented me from seeing the value of their work in many ways. In our testing we also often put blinders on when we stick too close to a "way". We need to be ready to always question, always seek the new and different, and challenge what we already think we believe. I heard James Bach say once (para-phrasing), "I am a man of passionate convictions, but they are lightly held". Don't let dogma prevent you from seeing something amazing.

Children Can Have Very Different Contexts - As I was sharing these comics with my daughter, I was tempted to put them in a particular order, or direct her to the start of the story. Instead, though, I wanted to see how she would approach the books I'd given her. What she did was she laid them out in categories based on title (OK, I gave her a little help in doing that). Rather than digging in from the start, she grabbed the first issue from each of the story arcs and leafed through each of them. When I asked her why, she said she wanted to get an idea about the world in which these story take place. I chuckled to myself in that, were it me, I would have never thought to do that. Why? Because that's not how I like to order things. I jokingly pride myself on being a "grouper" with a top down view of things, but when I read, I like continuity, so in that way, I'm very much a stringer and sequencer. Not Karina. She takes my grouping tendency to a whole new level (LOL!). She reminded me that, when I test, I can often get myself into too ordered a way of thinking, and forget the possibilities of de-focusing and taking an entirely different approach to things.

To my daughter Karina, I hope that these stories, these artists and these works will give you as much pleasure as they have given me over these past 25 years. Thank you for showing interest, and thank you for showing me a different way of looking at something I'd take for granted for decades. 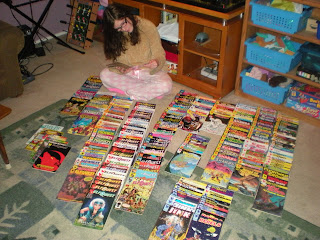 Posted by Michael Larsen at 2:47 PM

As a tester and ElfQuest fan myself, I loved this.

Sadly, I had to dispose of my ElfQuest comics when I moved to the USA: all I kept were the book collations.

Thank you for reigniting old and fond memories.