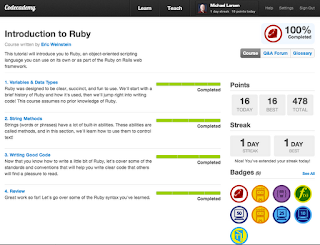 Have you seen the news? Looks like Codecademy has added a few new modules to its site. Now, in addition to learning JavaScript, Python and HTML/CSS, Ruby is now something to play with, too.

Having found Codecademy's model somewhat interesting in the past, I'm definitely interested in seeing what this system has to offer.  At first glance, it looks like they cover the basics, and get into Control Flow, Looping, Arrays and Hashes, and dealing with blocks and sorting of data.

I sat down today and did the Introduction to Ruby, just to see how it flows, and I have to say, the folks at Codecademy have been taking notes and responding to issues that have been reported. The Intro for Ruby went very smoothly. Even when I was deliberately being stupid, it was clear enough to explain where I was going wrong and what I could do to get back on track. The information in the side bars was clear and well formatted, and the interpreters responses were likewise clear and made sense to help the user understand where they are.

The gameification aspects are kind of fun, as is the ability to brag up your completion level if you want to. Some might chuckle or denigrate the gameification; I say, if it motivates you to do more and learn more, then more power to them.

This year, I've seen Codecademy make great strides in going from a platform of interesting, yet sparse, information, to one where a sizable amount of information can be had. I wish them lots more success, eyeballs and developers willing to share. Hopefully I can get to the point to where I know enough to return the favor.

Posted by Michael Larsen at 6:18 PM

I noticed the same thing, and totally agree that their website now is much more interesting with more information and a wider range of courses.

I am a beta tester for CodeAcademy and love how they readily take in the feedback we give.

I kind of like the gamification and earning the 'bragging rights' as we go. It gets quite fun when you get a bunch of competitive people to do it together!

I've gone through a few more of the modules and my hat is off to them, they've done a good job with this one. I've also signed on to be a beta tester so as to see what's being prepped and to help them with delivery, and to give me another incentive to be a regular over there.