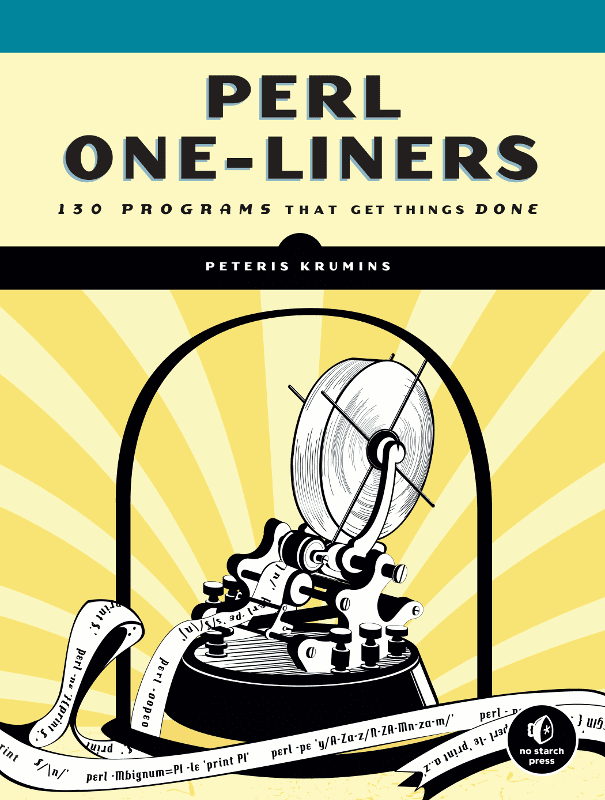 Remember when I said I was going to be on a plane for a combined total of 12 hours, and I was going to use it to work through a bunch of books? This is a continuation of that airline readathon. NoStarch has been really generous and given me a bunch of books to review, so in case you are wondering why there are so many NoStarch titles in a row, well, now you know why :).

There’s a certain cachet that comes with being able to hack up Linux, Darwin or UNIX boxes. Being able to write scripts is immensely helpful, but there’s always that knowing glance, that little nod, that holdover from the days of “Name That Tune”, where instead of saying “I can name that tune in one note”, the command line geek smiles and says "I can take care of that task with one line”.

Granted, those “one-liners" are often rather involved. Lots of pipes and tees and redirects, to be sure, but somehow, they can actually be said to be “one line fixes” or “one line scripts”. I currently work in an environment where Perl is still in active rotation. I used to write CGI programs in Perl once upon a time (and still maintain some of them to this day). I’ve always appreciated the ability to do things in one line, and in many ways, it’s a neat way to learn some of the more oddball syntax options of both the shell and a given utility, and actually put them into use. All this is my building up to the fact that, when I saw the listing for Peteris Krumins “Perl One-Liners: 130 Programs that Get Things Done”, it just begged for me to say “Oh please, let me review this!”

The back cover make the following claim:

Save time and sharpen your coding skills as you learn to conquer those pesky tasks in a few precisely placed keystrokes with Perl One-Liners.

So how does it stack up?

Chapter 1 is meant to help orient the reader towards the idea of a one-line fix or utility. Fact is, a lot of what we do are one-offs, or are tasks that we may need to do one time, but for dozens or even hundred of files. Some knowledge of Perl is  helpful, but many of the commands can just be typed in as is, examine the changes made, and work backwards. Windows users need to do a little tweaking to some of the commands, and Appendix B is here to help you do exactly that. Also, if you see examples that make you want to scratch your head (trust me, you will), there’s always perldoc, which will explain those areas you struggle with.

Chapter 2 looks at spacing, or more to the point, giving you control over just how much you want or can see. Each example explains the steps and the actions each command will perform. Various command line options like -e allow the user to iterate a while loop on every line in a file, so passing a variable parameter sets up an entire while loop. Lots of fascinating variations, each one doing something interesting, some easy to understand, and some bring cryptic to a new level ("perl -00pe0” anyone? Yes, Peteris explains it, and yes, it is pretty cool).

Chapter 3  covers Numbering, and a variety of quick methods to play and tweak with numbering lines and words. The “$." special variable gets covered (thinking it might have something to do with the line number of whatever you are interacting with? You’d be right!), as well as a game called "Perl golfing", which I guess is the Perl equivalent of my aforementioned “name that tune”.

Chapter 4 deal with Calculations. Want to do on the fly counting? Want to shuffle elements? Figure out if numbers are prime or non-prime? Determine a date based on an input? This chapter’s got you covered.

Chapter 5 focuses on Arrays and Strings. Want to create your open password generator? Figure out ranges? Determine what a decimal value is in Hex, and vice versa? Oooh, I know, how about creating strings of various characteristics to use for text input (come on testers, you were all thinking it ;) )? Maybe generating your own personal offset code to semi-encrypt your messages sounds like fun. There’s plenty here to help you do that. Of course, if that last one seems interesting, the next chapter offers some better options ;).

Chapter 6 deals with Text Conversion and Substitution. Apply base64 encoding and decoding (OK, much more effective, but maybe not quite as fun as making your own raw version), creating HTML or deconstructing HTML, creating or breaking up URLs, and a bunch of operators that allow for all sorts of interesting string manipulations.

Chapter 7 covers Selectively Printing and Deleting Lines. Typically, a one liner that can selectively print can be tweaked to selectively remove, and vice versa. Look for and print lines that repeat, or those that match a particular pattern (and of course, apply similar rules to remove lines that meet your criteria as well).

Chapter 8 brings us to Useful Regular Expressions, and Perl has a monster of a regular expression engine. Rather than give an exhaustive rundown, Peteris focuses on regex patterns that we might use, well, regularly. Finding and matching IP addresses and subnet masks, parsing HTTP headers, validating email addresses, extracting and changing values and many others. This chapter alone is worth the price of purchase.

The book ends with three Appendices. Appendix A gives a listing of Perl’s Special Variables, and how to use them in their context (with more one liner examples). Appendix B is all about Perl One-Liners on Windows, including setting up Perl, getting Bash on Windows, running the one liners from the command prompt or PowerShell, and the oddities that makes Windows, well, Windows, and how to leverage the book to work in that ever so fascinating environment. Appendix C is basically a print out of all the Perl one-liners in the book. It can be downloaded and examined as a quick “how do I do that again?” from one file.

This is a tinkerer’s dream. What’s more, its a book that you can grab at any old time and play with for the fun of it, and yes, this book is FUN. You may be an old hand at Perl, you may be a novice, or maybe you’ve never touched a line of Perl code in your life. If you want to accomplish some irksome tasks, it’s a good bet there’s something in here that will help you do what you need to. If the exact match isn’t to be found, it takes very few jumps to get to something you can use and work with, novice and guru alike. You might think it would be ridiculous to say to yourself “hey, I have a few minutes to spare, I think I’ll try out some Perl One-Liners for fun”. Maybe I’m weird, but that’s exactly what I find myself doing. It’s the coders equivalent to a Facebook game, but be warned, a few minutes can become a couple of hours if you’re not careful. Yes, that’s hyperbole, and at the same time, it isn’t. Perl One-Liners is seriously fun, and a wonderful “tech book” for the short attention span readers among us. You may find yourself turning to it again and again. My advice, just roll with it :).
Posted by Michael Larsen at 6:57 PM