On Letting Go and Embracing Change

During the week that I was at CAST in Grand Rapids, there were many changes in my personal life that occurred, and that I am having to process and work through now. this is not going to be about testing per se, but if I don't find a place to get this out, it's going to eat away at me, so I'm going to do it here. I'm also likely to get emotional here. I've commented that sometimes, we need to have navel gazing posts on our blogs from time to time, and this is one of those days.

Nine years ago, shortly after my son's tenth birthday, we decided it was time to have a pet join our family. My wife and I had kept animals like fish and birds for our entire marriage, but we hadn't had a dog or a cat, partly because we wanted our children to be old enough to appreciate them and interact properly with them. Our neighbors across the street had several Welsh Pembroke corgis, and of course my kids adored them. When it came time to have a dog, we knew they'd want a corgi, so we asked our neighbor who we might talk to. She told us of a corgi faire that was happening down in Los Gatos, CA, and that several breeders would be there showing their dogs. As we went and talked with people, we met a lady that had brought several dogs to show, including one that she felt wasn't really into the whole "dog show" thing. She believed this particular dog would benefit from being part of a family. Our kids met the dog in question, a sweet fawn colored girl that was a little over a year old, and they fell in love with her. We decided to take her home. My son at the time was playing Final Fantasy X and thought her coloring and her antics reminded him of one of the characters from that game, so he named her "Rikku".

About two months ago, we noticed that Rikku was moving more slowly, seemed to be breathing heavier, and was generally listless and not her usual self. as we were petting and scratching her, we noticed that around her neck and her hip joints, she had swelling and big bumps. We had the vet take a look at her, and our worst fears were realized. She had stage four lymphoma, i.e. cancer of the lymph nodes. we enquired about treatment options, but soon realized that her condition was terminal. It could be a year at the furthest, several weeks at the shortest. They gave us some medicine that they said could help her feel better in the short term, i.e. a cortico-steroid, but that it wasn't a cure. It would just be a matter of time before the cancer progressed further.

For several weeks, we gave her the steroid drug, and for a time she rallied. Her lymph nodes shrank considerably, and she was, in many ways, her old self. She was playful, happy, went with us to her favorite places, and interacted with us as she always had. Unfortunately, last week, the slow movements and heavy breathing came back again, and when we checked, her lymph nodes were even more swollen than before. I had to leave for Grand Rapids, but I asked the family to keep me informed as to her condition. By Monday, August 3, her mouth was gaping open at the sides. She couldn't close her mouth, her breathing had become ragged and harsh, and she wasn't walking well. She didn't look like herself, she didn't act like herself, and I was told that they felt that the time had come, and that we needed to have her put to sleep. They felt horrible that I wasn't there, but they felt waiting until I came back was going to prolong the inevitable and force her to deal with several more days of pain. I told them that they did not need to wait for me, that I understood what needed to be done, and that at this time, Rikku needed us to say goodbye and let her suffering end. My wife and elder daughter brought her into our veterinarians office on Tuesday, August 4, and they said their last goodbyes to our little girl.

Since I was dealing with the conference and all the activities that went along with that, I was kept busy and had limited time to think or process what had happened. In some ways, I felt bad that I wasn't able to be there with my family in this moment of grief and sadness, but I encouraged from afar and did my best to let them know I loved them and felt every bit the same way they did.

On Thursday, after wrapping up the last conference details, settling up with the hotel for any additional charges needed, and doing a last little bit of tourism around town, I got to the airport and flew from Grand Rapids to Dallas to catch the connecting flight to bring me home. Turns out while I was in the air, my wife and daughters went to the Peninsula Humane Society to see the animals there and to help process what had happened on Tuesday. While doing so, the girls found a rescued kitten, a domestic shorthaired calico girl. By the time I landed and was able to look at my messages, Christina told me that we had a kitten. She apologized and said that we should have waited until I came home to ask. I told her it was OK, and under the circumstances, totally understandable. When I asked if she had a picture, she sent me this: 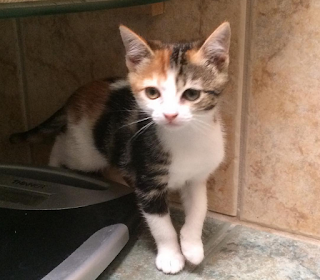 It would be another few hours until I got home, but once I arrived, I went into our little hallway bathroom (the place we have for the time being set up for the kitten's home) and got to know her. As I held her and listened to her purr like a small motorcycle, I cried a little for the loss of a longtime member of our family, but smiled a little in that this little patchy furball was already helping my girls come to grips with the loss of Rikku. This morning, as we were talking about the new member of our family, I made it clear that that is exactly what she was. She was not a "replacement" for Rikku, she was an animal with feelings and the ability to love and be loved in return, and that she required the same level of love and commitment that had been given to Rikku all these years. While I was waiting to get on the plane, I participated via chat in the "naming game" for this little kitty, and by the time I had gotten home, no suitable name  had yet been agreed to. This morning, though, that was resolved. We all agreed that her name would be "Éclair", because she looks like one with her chocolate and golden and white patches.

As I sit here today, walking around my home, listening for the barks and tell-tale scrabbling along the wooden floor that I would normally hear, it is clear that my little girl is gone. Rikku brought so much joy to my family, and I am missing her greatly. At the same time, Éclair is purring and meowing and nestling into my arms when I pick her up, and that brings a smile to my face. When I asked Christina what made her decide to get the kitten, she said it had been the eerie silence of the past two nights, the absence of the familiar noises and interactions with Rikku. She said the thought of dealing with that going forward was just too painful, and while part of her feels that having Éclair helps to act as a distraction to that empty silence, she is also warming up to her as well.

If you have read this far, I thank you. There really isn't a point to this other than I feel the need to talk about it and share this part of my reality at this time. As I was away for an entire week, I'm just now processing my emotions surrounding all of this. The one thing for sure is that time marches on, and changes will occur, whether we want them to or not. Life happens when you are busy making other plans, and sometimes, it has no regard for the things you had planned originally. Still, we have a chance to make new choices every day, and some of those choices can be profound. All we can do is live them and deal with the changes that come our way.

Posted by Michael Larsen at 2:48 PM