Aedificamus: The Value of Continuous Feedback

One thing I owe my readers is a full review of LoseIt. I keep saying I'm going to do one, but each time I try to get into it, I find the review keeps getting longer and more detailed. For those willing to wait for that, I'll plan to post it by the end of the week. The "tl; dr" version is "a great way to track calories and exercise, interact with others on your journey, and make fitness and weight loss somewhat fun and entertaining, or at least as fun and entertaining as it can be".

The piece I want to talk to for this posting is the community aspect, and how that community can be helpful if you let it be. With a couple of exceptions, my "friends" within the LoseIt app are people I do not know in real life. My sole interaction with them, at least so far, is via the LoseIt app. I know some might think that that's a very weak connection, and probably not really helpful beyond superficial cheerleading. I understand that reasoning, but I would have to soundly say to anyone who thinks that way, "you are wrong".

I had an interesting experience after I came back from Philmont in July 2016. Over the course of two and a half weeks, where I'd exercised a tremendous amount, burned a lot of calories, and kept a meticulous measure of my food, I should have come back leaner and lighter than ever. Instead, I came back close to twelve pounds heavier than when I had left. I was weirded out by that, and I felt a little ashamed. Maybe I hadn't kept as good a track as I intended. Maybe my calculations were wrong. Maybe I didn't work as hard as I thought. Regardless, I certainly didn't want to post a twelve-pound weight gain. What would my friends think?! Yes, even at this point, my primary feeling was of shame because I'd drifted so far off my course. My answer? I'd stop posting my weigh-ins for a bit, jut until I got back to my earlier number and then I could pick up like nothing happened. Surely it wouldn't take that long.

Days stretched into weeks, and weeks stretched into months, and then it dawned on me that I'd stopped weighing in entirely. I still posted, still logged my food, still cheered people on, but my weight hadn't moved on the charts for three months. Hmmm. Well, I better take a look. I mean, come on, how bad could it be?

I stepped on the scale and ended up reading a weight that was thirty pounds heavier than when I reached my lowest weight back in March of 2016. Thirty pounds!!! What the...?!! I knew full well what had happened, and why. I felt embarrassed to post a follow-up. It felt good to get that daily high five for being on track, even if the daily high five was coming from people I didn't really know. For certain, my embarrassment of having to post a reversal made me shy away from weighing in each day, and that shying away from weighing every day removed me from that immediate feedback loop. I ate much the same as I had been, and I figured I was moving about the same amount, but over the course of several months, the food intake crept up, the activity level crept down (injuries and minor aches helped that along, to be fair) and thus, I found myself in negative territory, giving up thirty pounds of gains.

I tried quietly setting a new goal, and I even made a post stating that I was trying a new plan of attack. Net result? New update and a definite highlight of reversal.

What also resulted? One of my friends gently calling me out and reminding me that I'd finally faced the elephant in the room and that I could move forward from here. 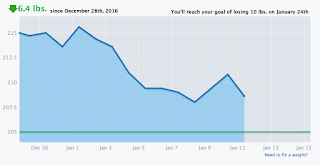 That old familiar saw-tooth pattern is with me again. I'm down roughly 6 1/2 pounds in the past couple of weeks. I have up days and down days, sometimes in a row, but usually back and forth. It's maddening, but it's also helpful. If I have a particularly big drop in a day, it's an indication that I can put the brakes on a little. If I bounce up a touch, it's an indication that I need to be more active. If I bounce up a lot, I need to seriously think about what I ate the day before, and see how I make sure to not repeat it today. The key point is everyday feedback, both from my app via pictures and data points, and those daily cheers and well wishes from virtual friends contribute to success. The real takeaway is our online friends are our support system, and they want us to succeed. They will cheer us on, but they will not often call us on our BS. They will wait and watch patiently, to see what we ultimately do. In my case, it was obvious that my lack of weigh-ins was a sign that I'd lapsed. When I stepped up and admitted it, no one called me a failure or lazy or any of that. They just said "glad to see you are back on track. Good luck out there."

Fitness goals are often challenging. They take a lot of patience and focus. Quick feedback is helpful but more important is a willingness to accept that feedback and actually act on it. Get over the embarrassment of lapsing. It doesn't mean we lack discipline. It means we're human, like roughly eight billion others out there. Own that humanity, log the discrepancies and move on. Our friends want to celebrate our successes, not remind us of our failings. No, really, it's true. If we have a bad day, acknowledge it, deal with it, and do better the next day, and the next day, and the next. Ultimately, we will reach the goal we have set and probably much faster because we are allowing for regular feedback each day. Don't let temporary embarrassment derail your goals. Use the feedback each day to plan an even better tomorrow.

Posted by Michael Larsen at 2:37 PM