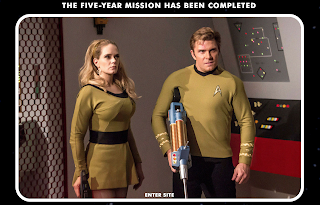 One of my goals for 2018 is to write about more stuff that interests me and that helps inform what I do day to day. Yes, TESTHEAD is primarily about software testing, but often there is a lot of stimuli that feeds into how I think about testing, and a fair amount of that stimulus cannot be boiled down to "here, use this and it will help you test things better". Still, I think there's a value to it and I want to be able to talk about it in some way, so as in the past, I'm making a heading so that, if you want to play along, you can. If you don't, you can safely skip over posts that don't interest you. That new heading is "Geek Crush", and yes, it's a play on words of Charles W "Chuck" Bryant's podcast "Movie Crush", only it covers a broad range of my geeky interests, many of which help directly or indirectly in my worldview and filter into how I think about testing.

My first entry into this comes courtesy of SacAnime, an event I attended this past weekend with my daughters in Sacramento, CA, USA. We've been going thee past few years and this year I specifically went because I was excited to learn that the primary cast of RWBY was going to be there and I wanted to meet them (a future post will most definitely feature me talking about my RWBY addiction, but not today ;) ). During this event, I learned that there was going to be a special screening hosted by Vic Mignogna of "Star Trek Continues". I went to the screening and left a huge fan and with a great desire to see a lot more.

Disclaimer: Star Trek and all related marks, logos and characters are solely owned by CBS Studios Inc. This fan production is not endorsed by, sponsored by, nor affiliated with CBS, Paramount Pictures, or any other Star Trek franchise, and is a non-commercial fan-made film series intended for recreational use. No commercial exhibition or distribution is permitted. No alleged independent rights will be asserted against CBS or Paramount Pictures.

First off, let's talk about what 'Star Trek Continues" is. For those who were fans of the original Star Trek Series with William Shatner, Leonard Nimoy, DeForest Kelley, Nichelle Nichols, George Takei, Walter Koenig, James Doohan, etc., you know that the original mission was five years to seek out new life in distant star systems and "to boldly go where no man has gone before". Well, the original series was canceled after three years, meaning that mission was never finished, at least not on film. When the movies started up in the late 70s, we picked up with them ten years later and "got the band together again", so to speak, with a lot of stuff happening in between. What happened during the last part of the five-year mission? What causes Captain Kirk to want to take a desk job? Why did Spock return to Vulcan and what led up to that decision? Vic decided that these were questions he wanted to see made into episodes, and thus "Star Trek Continues" does exactly that. It is a web series filmed in the tones, the style, the outfits and the literal zeitgeist of "Star Trek: The Original Series" with Vic Mignogna stepping into the uniform and mannerisms of James Tiberius Kirk. He's joined by Todd Haberkorn as Spock, Grant Imahara as Sulu and Chris Doohan (James Doohan's son) as Scotty.

First off, I have to say that Vic has pulled off something amazing. You literally feel like you are watching the original show, as far as the sets, the sound effects, the clothing and the mannerisms of the various characters are concerned. Vic explained that they went to great lengths to be able to do this because they knew that anything out of place would pull the audience out of the experience. Granted, Vic is not William Shatner and Todd is not Leonard Nimoy, so there are certainly visible differences. They also bring themselves into the roles, too; they are not slavishly recreating Kirk, Spock, or any of the other characters. Still, the feeling of the episodes, the tropes used, the acting style, the lighting, and makeup, all of it makes you feel as though you are watching the original series, down to the music and practical special effects.

I started watching Star Trek sometime in the mid-70s when it was being syndicated as after-school television. I did not have the experience of watching it when it was first on television but I well remember the feeling of wonder and excitement the original series provided to me during my elementary school days. Star Trek Continues brings back those feelings. I'm reminded of Gene Roddenberry's vision. Knowing how obsessive Vic is with his love of the original Star Trek, I am so excited that he made this and I am excited to see the rest of the series. If you are one who enjoyed the original Star Trek and had hoped that one day you might see more of it, here is your chance.
Posted by Michael Larsen at 10:26 AM

I've watched the whole Star Trek Continues series. Well done and true to the cannon (99% of it) of Star Trek: TOS. I'm not going to spoil it for anyone, just say that if you are a Star Trek fan you have to see this (beginning to end). You won't be disappointed.