Happy New Year everyone. Sorry for the delay between sections, but with it being New Years weekend, and activities with my kids, putting away Christmas decorations, and all of the other things related to turning a house upside down after a holiday season, I needed the holiday time. I'm back now, though, and on track to finish these modules out by the end of January if not sooner (good thing, as the end of January is my hard completion deadline for this project :) ).


So back in Exercise 40, we did some playing around with arrays and dictionaries/hashes. Alone with that, we had some additional items added into the mix that, to tell the truth I wasn't 100% sure what was going on. Fortunately, Zed and Rob tell us specifically what is happening here.

Here's the code block that they wanted me to focus on:

variables can hold lots of values. They can also hold entire blocks of code. To do that, a "proc" (short for procedure) is made. to do that, a built in command called "method" is called (yes, functions and methods are interchangeable, but this is a specific method called "method" that actually does this... now you see why it's been a few days since I've posted ;) ).

The return from "method" is the full proc of "find_city" method (again, we need to pay attention here). That full proc is then stored in the hash called "cities", and uses a key called ":find".

The point here is that, with the "find_city" proc being included in a hash with the key of ":find", we can use that proc by calling on its key.

The 2nd line of code does the following:

Ruby reads the variable "cities" and determines it's a hash/dictionary.

[:find] looks at the "cities" hash/dictionary and evaluates the value of  ":find".

This is the proc "find_city" that we set up using "method". When it sees the method ".call", it calls the proc code.

Since the proc expects parameters, we pass it two parameters, in this case, "cities" and "state". find_city then tries to look up states inside cities.

If it finds a match, it returns it. If it doesn't it returns a message saying it couldn't find a match.

Finally, prints out the value returned by the ":find_city" proc using the puts method.

Did that seem confusing? Yeah, I agree. It's taken me a while to get my head around this, too, and I'm still not entirely sure that I'm 100% there. Zed offers the following trick to help us remember these things. Read the code backwards.

Here's another way to read it, this time "inside-out".

Zed suggests that reading code and not getting totally lost helps if you can do the three approaches he's described. When reading code, you should read it:

So here's the code for today's project. this spans multiple pages, so the screen shots are mostly carved up into their respective methods, give or take a couple. See below: 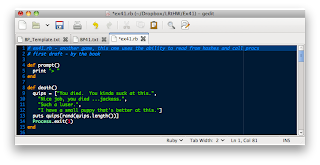 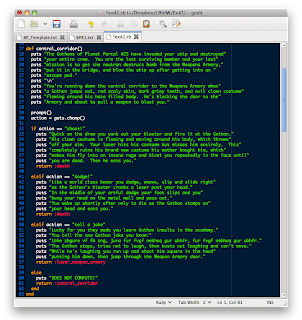 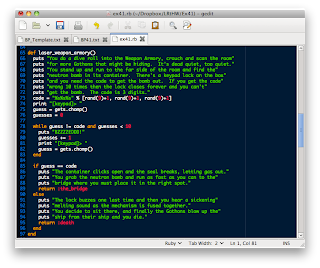 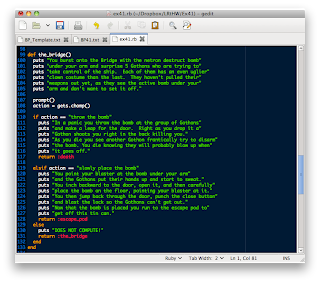 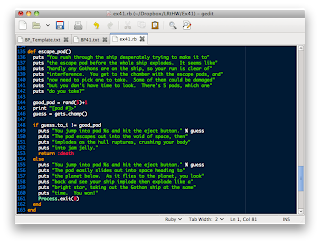 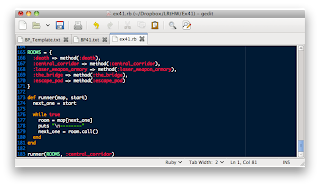 --------
The Gothons of Planet Percal #25 have invaded your ship and destroyed
your entire crew.  You are the last surviving member and your last
mission is to get the neutron destruct bomb from the Weapons Armory,
put it in the bridge, and blow the ship up after getting into an
escape pod.


You're running down the central corridor to the Weapons Armory when
a Gothon jumps out, red scaly skin, dark grimy teeth, and evil clown costume
flowing around his hate filled body.  He's blocking the door to the
Armory and about to pull a weapon to blast you.
> dodge!
Like a world class boxer you dodge, weave, slip and slide right
as the Gothon's blaster cranks a laser past your head.
In the middle of your artful dodge your foot slips and you
bang your head on the metal wall and pass out.
You wake up shortly after only to die as the Gothon stomps on
your head and eats you.

--------
The Gothons of Planet Percal #25 have invaded your ship and destroyed
your entire crew.  You are the last surviving member and your last
mission is to get the neutron destruct bomb from the Weapons Armory,
put it in the bridge, and blow the ship up after getting into an
escape pod.


You're running down the central corridor to the Weapons Armory when
a Gothon jumps out, red scaly skin, dark grimy teeth, and evil clown costume
flowing around his hate filled body.  He's blocking the door to the
Armory and about to pull a weapon to blast you.
> tell a joke
Lucky for you they made you learn Gothon insults in the academy.
You tell the one Gothon joke you know:
Lbhe zbgure vf fb sng, jura fur fvgf nebhaq gur ubhfr, fur fvgf nebhaq gur ubhfr.
The Gothon stops, tries not to laugh, then busts out laughing and can't move.
While he's laughing you run up and shoot him square in the head
putting him down, then jump through the Weapon Armory door.

Explain how returning the next room works.


[We are effectively using hash keys, and those hash keys are calling on the actual functions as their return values. Each function is being stored as a proc in the ROOMS dictionary/hash table.]

Add cheat codes to the game so you can get past the more difficult rooms.

Instead of having each function print itself, learn about "here document" strings.

Write the room description as here document strings, and change the runner to use them.

[ Here document strings make it easy to put text together, and it's  nice to not have to repeat all of the puts statements. The only thing I don't like about them is that it kinda hurts my sensibility of properly indented code. Still, I guess I can live with it :) ]. 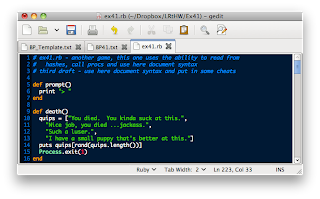 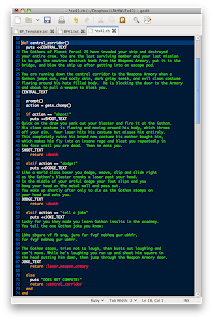 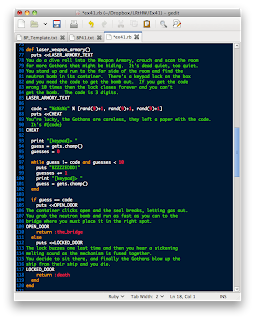 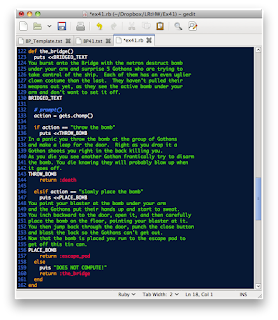 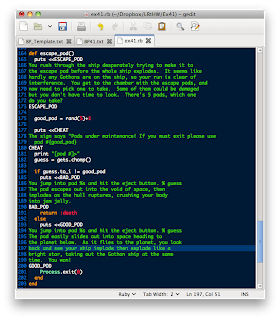 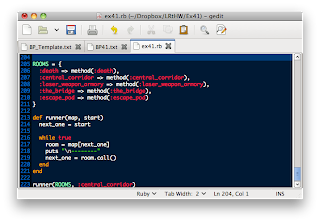 Here documentation will take some getting used to, but I like the idea of being able to use a hash to keep the return values in check. It makes it easier to read once you see what it's actually doing, plus it makes it easier to maintain. Also, I need to pick up the pace and get back into a  daily groove where possible (it's amazing what you have to go back and review when you've been away for a few days!).