As Zed makes the point at this stage, the time has come where I have to start feeding myself, so in this exercise, I revamped my little haunted house program and made it more modular, as well as made it "Classy".


Well, sort of. I admit I got lost when I tried to make it so that the system could run as multiple classes at the same time, so in this case, I'm just running one class to run the game, and calling the rooms as methods. It's something I will evaluate again, but I need to get moving on this. Because of that, I'm going to treat the Make a Game and Evaluate the Game exercises together. 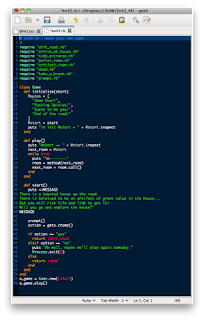 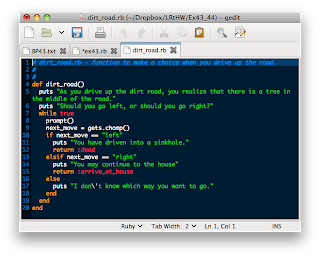 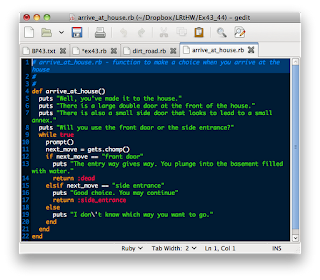 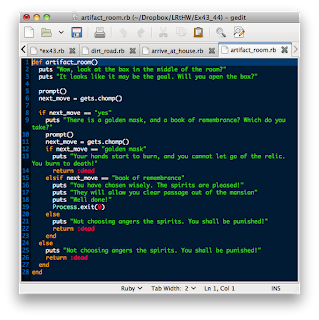 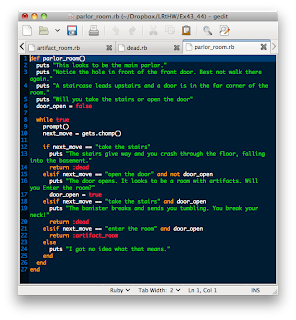 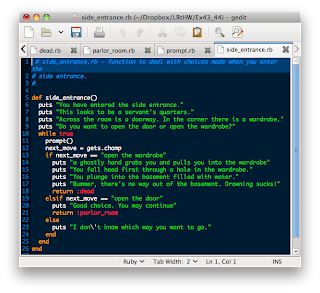 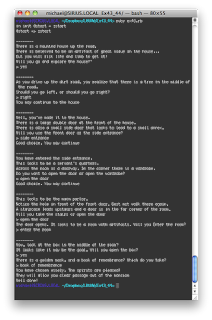 In this exercise you will evaluate the game you just made. Maybe you got part-way through it and you got stuck. Maybe you got it working but just barely. Either way, we're going to go through a bunch of things you should know now and make sure you covered them in your game. We're going to study how to properly format a class, common conventions in using classes, and a lot of "textbook" knowledge.

The key here is that Zed and Rob are not going to have us just mimic what they do, they are going to have us try it, succeed or get frustrated (maybe both) and then review what we could do better. Hey, I'm all for it, so let's see what they suggest (note: since this is their advice for reviewing code, I'm basically repeating it verbatim).

All the other rules I've taught you about how to make a function nice apply here, but add these things:

- For various reasons, programmers call functions that are part of classes methods. It's mostly marketing but just be warned that every time you say "function" they'll annoyingly correct you and say "method". If they get too annoying, just ask them to demonstrate the mathematical basis that determines how a "method" is different from a "function" and they'll shut up.

- When you work with classes much of your time is spent talking about making the class "do things". Instead of naming your functions after what the function does, instead name it as if it's a command you are giving to the class. Same as pop is saying "Hey array, pop this off." It isn't called remove_from_end_of_list because even though that's what it does, that's not a command to an array.

- Keep your functions small and simple. For some reason when people start learning about classes they forget this.

- Your class should use "proper case" like SuperGoldFactory rather than super_gold_factory.

- Try not to do too much in your initialize functions. It makes them harder to use.

- Your other functions should use "underscore format" so write my_awesome_hair and not myawesomehair or MyAwesomeHair.

- Be consistent in how you organize your function arguments. If your class has to deal with users, dogs, and cats, keep that order throughout unless it really doesn't make sense. If you have one function that takes (dog, cat, user) and the other takes (user, cat, dog), it'll be hard to use.

- Try not to use variables that come from the module or globals. They should be fairly self-contained.

- A foolish consistency is the hobgoblin of little minds. Consistency is good, but foolishly following some idiotic mantra because everyone else does is bad style. Think for yourself.

- Give your code vertical space so people can read it. You will find some very bad programmers who are able to write reasonable code, but who do not add any spaces. This is bad style in any language because the human eye and brain use space and vertical alignment to scan and separate visual elements. Not having space is the same as giving your code an awesome camouflage paint job.

- If you can't read it out loud, it's probably hard to read. If you are having a problem making something easy to use, try reading it out loud. Not only does this force you to slow down and really read it, but it also helps you find difficult passages and things to change for readability.

- Try to do what other people are doing in Ruby until you find your own style.

- If you find someone who writes code in a style you like, try writing something that mimics their style.

- There are programmers who will tell you that your code should be readable enough that you do not need comments. They'll then tell you in their most official sounding voice that, "Ergo you should never write comments." Those programmers are either consultants who get paid more if other people can't use their code, or incompetents who tend to never work with other people. Ignore them and write comments.

- When you write comments, describe why you are doing what you are doing. The code already says how, but why you did things the way you did is more important.

- When you write here doc comments for your functions, make the comments documentation for someone who will have to use your code. You do not have to go crazy, but a nice little sentence about what someone does with that function helps a lot.

- Finally, while comments are good, too many are bad, and you have to maintain them. Keep your comments relatively short and to the point, and if you change a function, review the comment to make sure it's still correct.

As I've had the chance to consider the way that I do things, I am getting more and more comfortable seeing how the code is structured and understanding what I'm seeing. As I look into some of the underlying code in my own everyday Cucumber suites (and their requisite step definitions) I'm seeing a lot of places where, before, I would have said "OK, I don't quite get what that is doing, but I'll trust it for now" and instead I'm starting to see where I have errors and what should be there in their place. Additionally, I'm starting to notice where style differentiations make a difference and where they don't.  All in all, it's been good practice and very helpful.
Posted by Michael Larsen at 1:00 PM