Preparing for the "Second Act"

Part One of our USA-Japan Sister City odyssey has completed. For the Japanese students, they have come, experienced, been hosted, participated in events and activities, left an indelible impression on a number of families and intermediate school students, and have headed home. With this, we draw to a close the First Act of our story.

The Second Act is now underway, and in many ways, this already has a back story and some setup that has been happening for weeks, months, and (truthfully) years to get us to this point. For us to make a prologue for Act Two, I need to give some context:

My kids have developed a love of Japanese culture because their parents have had a long-standing love of Japanese culture. Christina has been, over many years, the recipient of many gifts through her father. He has used his skills as a machinist to purchase, refurbish and sell post-WW2 cameras made in Japan for camera enthusiasts in Japan. Because of this, many people have expressed their thanks by sending him gifts over the years, some of them quite elaborate and beautiful. Most of those gifts he, in turn, gave to Christina. I was also able to share with Christina my own love for things Japanese, including my teenage years spent watching Japanese Anime from the 70s and 80s, studying Aikido, and learning as much as I could about Japan's early history, its folklore, and its majestic (and turbulent) eras that led it to today. Is it any wonder that my children would grow up with an appreciation of Japan :)?

It's with this as a background that my kids grew up with Anime, Manga and video games that originated in Japan (not to mention sushi and other foods), and that it made up such a part of their lives for so long. With that, again, it should also have been no surprise that my kids would reflect an interest in participating in the Sister City exchange program. My son had, earlier on, been on track to attend the Boy Scout Jamboree in 2010, so that was my initial focus for him, but a financial meltdown and recession in 2009 halted that, and any other, travel options for awhile. Thus, he had to be content to do Scout camps around California each summer instead.

When Karina came to Parkside, she started asking about the Sister City program from day one, and if she could go. At the time, I didn't think it was doable, but I decided that, since I'd paid for several years of Scout Camp for my son, and the outlay over the years was equal to if not more than the cost for the trip to Japan, I figured I would explore the options. As part of that exploration, I made a challenge to my daughter that she come up with half the money herself.

This is a common tactic I use for many things with my kids. The reason is two fold; first, I wanted to gauge how serious she was and second, if she had an actual plan for attaining it. Karina's answer was rather simple. She went and got a jar, an index card and some Scotch tape. On the index card, she wrote down "Japan Trip". Over the next few weeks, I noticed that the jar was filling up with tens and twenties. I figured at first some of this was gifts from her grandparents and such, but when I noticed that it kept growing each week, at a more rapid clip than I'd heard of her receiving gifts from others, I had to ask. How was she getting the money?

She said "I decided to sell some of my art work. My class mates are buying drawings I am making for them."

These are examples of some of the items she has sold: 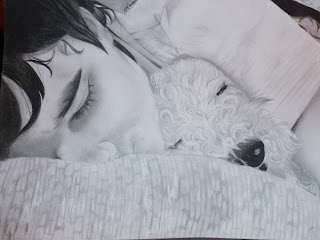 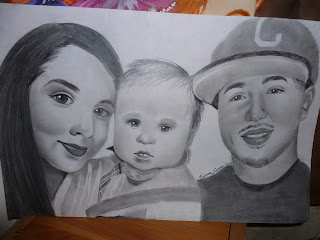 Additionally, for those of you with Facebook, here's a small "gallery" of other work she has done.

As she started to accumulate the funds for this trip, and more to the point, when I would come upstairs late at night on a variety of evenings and see her hunched over her latest artwork that she was doing, I knew she had the desire to go, the inventiveness to find a way to pay for it, and the tenacity to actually see it through. How could I say no to that?! With this realization, I went from "skeptical" to "all in".

I am immensely proud of her, and for the initiative she is taking to make this happen, and to that end, I am now going to do what I can to help her, which is to share the following with anyone interested. Karina wants to use her skills at drawing to raise money so she can pay her way to Japan. I want to help her do that, so if anyone here is interested in helping her reach her goal, please let me know in the comments section. Also, I want to reiterate that my daughter is, first and foremost, a middle school student, and the role of middle school student is the primary role I want to have her focus on. This artwork as fundraiser is secondary to that, but at the same time, I totally want to encourage her entrepreneurial spirit, so if you'd like to have a "Karina original", please let me know :).

It is great that Parkside is still doing the student exchange! I have many fond memories when I was at Parkside and participated. So much crying when everybody went home! Hopefully your kids will be able to go to Japan on a student exchange - that was even more awesome than being a host.