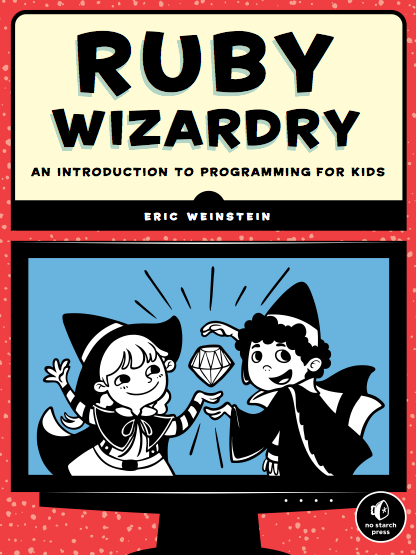 Continuing with the “Humble Brainiac Book Bundle” that was offered by NoStarch Press and Humble Bundle, I am sharing books that my daughter and I are exploring as we take on a project of learning how to write code and test software. Part of that process has been to spend time in the "code and see" environment that is Codecademy. If you have done any part of the Ruby track on Codecademy, you are familiar with Eric Weinstein’s work, as he’s the one who wrote and does updates to the Ruby section (as well as the Python, JavaScript, HTML/CSS and PHP modules).

With "Ruby Wizardry", Eric takes his coding skills and puts them into the sphere of helping kids get excited about coding, and in particular, excited about coding in Ruby. Of all the languages my daughter and I are covering, Ruby is the one I’ve had the most familiarity with, as well as the most extended interaction, so I was excited to get into this book and see how it would measure up, both as a primer for kids and for adults. So how does Ruby Wizardry do on that front?

As you might guess from the title and the cover, this book is aimed squarely at kids, and it covers the topics by telling a story of two children in a magical land dealing with a King and a Court that is not entirely what it seems, and next to nothing seems to work. To remedy this, the children of the story have to learn some magic to help make the kingdom work properly. What magic, you ask? Why, the Ruby kind, of course :)!

Chapter 1 basically sets the stage and reminds us why we bought this book in the first place. It introduces us to the language by showing us how to get it ("all adults on deck!”), how to install it, make sure it’s running and write our first "Hello World” program. It also introduces us to irb, our command interpreter, and sets the stage for further creative bouts of genius.

Chapter 2 looks at "The King's Strings" and handles, well, strings. Strings have methods, which allow us to append words like length and reverse written with dots ("string".length or 'string'.reverse). Variables are also covered, and show that the syntax that works on raw strings also works on assigned variables as well.

Chapter 3 is all about Pipe Dreams, or put more typically, flow control, with a healthy dose of booleans, string interpolation, and the use of structures like if, elseif, else and unless to make our Ruby scripts act one way or another based on values in variables and how those values relate to other things (such as being equal, not equal, done along with other things or in spite of other things, etc.).

Chapter 4 introduces us to a monorail, which is a train that travels in an endless loop. Likewise, the chapter is about looping constructs and how we can construct loops (using while as long as something is true and until up to the point something becomes false, along with for to iterate over things like arrays) to do important processes and repeat them as many times as we want, or need. Also, it warns us to not write our code in such a way to make an infinite loop, one that will just keep running, like our monorail if it never stops.

Chapter 5 introduces us to the hash, which is a list with two attributes, a key and a value,  as well as the ability to add items to arrays with shift, unshift, push or pop. Additionally we also learned how to play with ranges and other methods that give us insights as to how elements in both arrays and hashes can be accessed and displayed.

Chapter 6 goes into talking about symbols (which is just another word for name), and the notation needed to access symbols. Generally, the content of something is a string; the name of something is a symbol. Utilizing methods allows us to change values, convert symbols to strings, and other options that allow us to manipulate data and variables.

Chapter 7 goes into how to define and create our own methods, including the use of splat (*) parameters, that allows us to use any number of arguments. We can also define methods that take blocks by using "yield".

Chapter 8 extends us into objects, and how we can create them and use them. We also learn about object IDs to tell them apart, as well as classes, which allow us to make objects with similar attributes. We also see how we can have variables with different levels of focus (Local, Global, Instance and Class) and how we can tell each apart (variable, $variable, @variable and @@variable, respectively).

Chapter 9 focuses on inheritance, which is how Ruby classes can share information with each other. this inheritance option allows us to create subclasses and child classes, and inherit attributes from parent/superclasses.

Chapter 10 shows us a horse of a different color, or in this case, modules, which are a bit like classes, but they can't be created using the new method. Modules are somewhat like storage containers so that we can organize code if methods, objects or classes won't do what we want to do.  By using include or extend, we can add the module to existing instances or classes.

Chapter 11 shows us that sometimes the second time's the charm, or more specifically, we start getting the hang of Refactoring. Using or operators to assign variables, using ternary operators for short actions, using case statements instead of multiple if/elseif/else statements, returning boolean variables, and most important, the removal of duplicate code and making methods small and manageable.

Chapter 12 shows us the nitty-gritty of dealing with files. Opening reading from, writing to, closing and deleting files are all critical if we want to actually save the work we do and the changes we make.

Chapter 13 encourages us to follow the WEBrick Road, or how we can use Ruby to read and write data from the Internet to files or back to Internet servers using the open-uri gem, which is a set of files that we can use to make writing programs easier (and there are lots of Ruby gems out there :) ).

Chapter 14 gives some hints as to where you, dear reader, might want to go next. This section includes a list of books, online tutorials, and podcasts, including one of my favorite, the Ruby Rogues Podcast. It also includes interactive resources such as Codecademy, Code School, and Ruby Koans, and a quick list of additional topics.

The book ends with two appendices that talk about how to install Ruby on a Mac or a Linux workstation and some of the issues you might encounter in the process.

For a "kids book", there's a lot of meat in here, and to get through all of the examples, you'll need to take some time and see how everything fits together. The story is engaging and provides the context needed for the examples to make sense, and each section provides a review so that you can really see if you get the ideas. While aimed for kids, adults would be well suited to follow along as well. Who knows, some wizarding kids might teach you a thing or three about Ruby, and frankly, that's not a bad deal at all!