Aedificamus: The Inelegance of Achieving Goals

Below is a picture I look at almost every day. I've watched this picture grow since August 30, 2015. It's a graph, with a definite trend, but it's not clean, it's not elegant, and it tells a lot about reality and challenges, disappointments and elation, setbacks and moving forward. 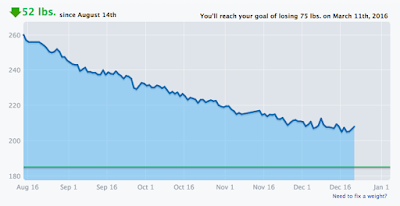 That graph is what weight loss looks like. Often, we see charts that show a straight line from Point A to Point B. That's because they take the start value and the finish value, and then plot it over the total time. It's accurate, but only partially. What is missed is everything that happens in between. The initial drop that gets us motivated, followed by reversals, sometimes the very next day. Sometimes we have plateaus, sometimes, no matter what we do, we get spikes upward that seem to make no sense. We get tired. We get sick. We become demotivated. We lapse. We then weigh in, get frustrated, redouble our efforts, and then start the process all over again.

The reason the map is jagged comes from the fact I made a commitment to weigh myself every day. There's one exception to that rule; while I was in Potsdam for Agile Testing Days, I didn't have access to a scale. That meant that, for seven days, I could not weigh myself to see what was happening. When I got back and weighed in, I had gained two pounds. A setback, to be sure, but being at a conference half way around the world, with its crazy hours and no ability to make my own food for the duration, I was OK with that. The long flat rise in the graph reflects that time, and I can see it for what it is, and what it represents.

December is a perfect storm of a month. My daughter, wife and I all celebrated birthdays within a week of each other. My wife and I also celebrate our wedding anniversary in this same week. As we lead up to the Christmas Holiday and all the numerous other celebrations that come together during December, it is ridiculously easy to see dramatic changes in progress. I can pinpoint every celebratory meal and event that caused the spikes, and each drop that occurred after I got back to my regular habits and practices.

The green line at the bottom is my end goal. By the time I reach it, I will have lost a total of seventy five pounds, I will have a BMI that doesn't categorize me as overweight, and I am aiming for a bodyfat percentage somewhere around 15%. Less would be great, but I can happily live with 15%. I still have a third of the poundage left to lose, and the journey is getting harder the closer I get to the goal. Even then, once I hit the goal, then the real challenge starts, that of keeping my weight at the target long term. I've dropped weight before, but I've not been successful in keeping it off. I am trying to make this time be different.

It strikes me that this process is similar to most of the goals we set. If taken in their entirety, they can feel overwhelming and impossible. The time commitment and dedication required can deflate even the most enthusiastic. This time around, I decided to recruit some help and reinforcement. The first was electronic, in the way of fitness and nutrition apps that helped me plot a course, figure out small changes I could make, and over the course of several months, try out what worked best for me. Some ideas are simple and almost mantra like, such as "get 10,000 steps every day". Some required me evaluating my age and some aches and pains I can't avoid, but rather than being macho and "work through the pain" I adapted what I did so I could work around and deal with the pain proactively. Later, when I lost a bit of weight, or gained strength doing something else, I was able to go back to the areas I was less comfortable with or at the time hurt too much to be effective, and was able to be effective at that point. Little changes, small victories.

Additionally, I have been bolstered by people that I do not personally know, but who have been tremendously helpful along this journey. I have vacillated on this in the past, but I am becoming more convinced that accountability partners are important, and in some situations, the less emotionally attached you are to those accountability partners, the better. When we are emotionally attached to our accountability partners, we are more likely to forgive lapses, both in ourselves and in them. I don't have that same level of connection with my LoseIt friends, and in a way, I think that's a strength. To be fair, they have been nothing but supportive and wonderful, so I am not saying this as a way to say these people are distant. In fact, I feel like I've grown to know them pretty well. It's just that this is the context in which I know them, the context of losing weight and exercising, so I feel more inclined to bring my best to my interactions. Same goes to my interactions with coding and testing initiatives. I'm likely to give more of my focus and attention to those who both understand the domain I am in, but are not "too close" to me.

As I stare down the twenty plus pounds remaining, I am reminded yet again that no goal worth attaining is ever easy, and that setbacks are how we learn. If it were easy, everyone would achieve it. My thanks to all who find this journey remotely interesting. Even if you do not, but you still spend time to read this blog and message me from time to time, thank you. You all help keep me going :).
Posted by Michael Larsen at 10:58 AM