Last year, my friend Bill Opsal and I proposed something we thought would be interesting. A lot of people talk about testing frameworks but if you probe deeper, you realize that what they are actually after is an end to end solution to run their tests. More times than not, a "testing framework" is a much larger thing than people realize or at least what they are envisioning is a larger thing.

Bill and I started out with the idea that we would have a discussion about all of the other elements that go into deciding how to set up automated testing, as well as to focus on what a framework is and isn't.

The net result is the workshop that we will be delivering today (in about three hours as I write this). 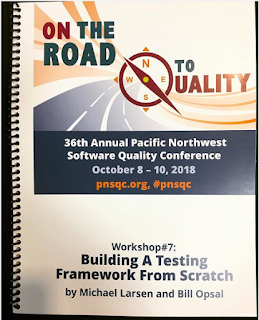 We will be presenting "Building a Testing Framework from Scratch (*)". The subtitle is "A Choose Your Own Adventure Game". In this workshop, we will be describing all of the parts that people tend to think are part of a testing framework, how essential they are (or are not), and what you can choose to do with them (or choose to do without them). Additionally, we are giving all participants a flash drive that has a fully working, albeit small, testing framework with plenty of room to grow and be enhanced.

OK, so some of you may be looking at the title and seeing the asterisk. What does that mean? It means that we need to be careful with what we mean by "From Scratch". When Bill and I proposed the idea, it was from our impression of "starting with nothing and going from there" and that is what we have put together. Not being full-time programmers, we didn't realize until later that that could also be interpreted as "coding from the ground up". To be clear, that is not what this is about. Neither Bill or I have the background for that. Fortunately, after we queried the attendees, we realized that most were coming to it from the perspective of our intended example. We did have a couple who thought it was the latter and gave them the option of finding a workshop that would be more appropriate for their expectations ;).

In the process, we also agreed we would do our best to try to overcome another challenge that we had experienced in workshops for years; the dreaded "install party". That's the inevitable process of trying to get everyone to have the software running on their systems in as little time as possible. This has been a long-running challenge and workshop coordinators have tried a variety of ways to overcome it. Bill and I decided we would approach it in the following manner:

Today we are going to see how well this goes with a room of twenty-eight people. We will test and see if we are successful (for science!).

Tomorrow and in the coming days, I will share the results of the workshop, the good, bad, and ugly that we witnessed (hopefully much of the first but if we get some of the second or third I want to see how we can do better), as well as some of the decisions we made in making the materials that we did. We hope you will join us :).
Posted by Michael Larsen at 10:31 AM