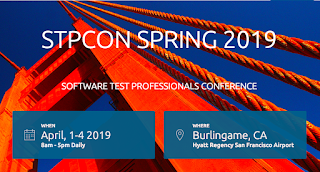 First off, Melissa Tondi is doing something I fully intend to steal. There are varying thoughts and approaches to having an introductory slide that introduces the speaker. Some don't use one at all. Some are required to do so at certain conferences. Melissa does something that I think is brilliant, funny and useful. Her first slide after the title simply starts with "Why Me?"

In short, Melissa is spelling out not who she is, or what her credentials are, but rather "you are here because you want to learn something. I want to give you the reasons why I think I'm the right person for that job here and now for you." Seriously, if you see me doing this at a future conference, props to Melissa and you saw it here first ;). 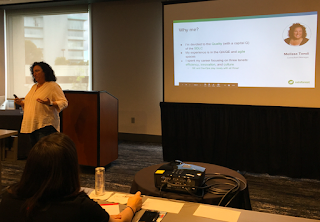 One of the avenues that Melissa encourages is the idea of re-tuning the methodologies that already exist. One aspect that I appreciate is Melissa's emphasis on not just QA (Quality Assurance) but also QE (Quality Engineering). They are often seen as being interchangeable, but the fact is they are not. They have distinctive roles and software testers frequently traverse both disciplines. The title is not as important as what is being done. Additionally, a key part of this is the ability to balance both technical acumen and user advocacy. In short, push yourself closer to Quality Engineering so that you can be an influence on the building of the software, even before the software gets built.

Introducing DevOps to an organization can be a wild ride since for so many people we don't even know what Dev Ops is. Melissa is using Anne Hungate's definition of "The collapse and automation of the software delivery supply chain". For many, that starts and ends with building the code, testing the code and deploying the code. The dream is a push button, where we press the button, everything is magic, and the software rolls out without any human interference. Sounds great and believe me, the closer we get to that, the better. We will step away from the fact that certain people won't be able to do that for practical business reasons but still having the ability in all of the key areas is of value.

There are some unique requirements in some countries and companies to have a title of "Engineer". That's a term that has a certain level of rigor associated with it and it's understandable that some would shy away from using an Engineering extension where it's not formally warranted. For this talk, let's set that aside and not consider QE as an official title but more as a mindset and a touch point for organizing principles. In short, you can be a QE in practice while still holding a QA title. Engineering presupposes that we are developing processes and implementing approaches to improve and refine work and systems.

On area that is definitely in the spotlight is test automation. A key point is that test automation does not make humans dispensible or expendable. It makes humans more efficient and able to focus on the important things. Automation helps remove busywork and that's a great place to apply it. Additionally, it's possible to automate stuff that nets little other than make screens flash and look pretty. Automating everything doesn't necessarily mean that we are automating important or intelligent items. Automation should get rid of the busy work so that testers can use their most important attribute (their brain) on the most important problems. Additionally, it's wise to get away from the "automate everything" mindset so that we are not making a monolithic monster that by its sheer weight and mass makes it unwieldy. By parallelizing or parameterizing tests, we can organize test scripts and test cases to be run when it's actually important to run them. In short, maybe it makes more sense to have "multiple runs" to come to a place of "multiple dones" rather than "run everything just because".

Use automation to help define what is shippable. There shouldn't be an after the fact focus on automating tests if they are actually important. By focusing on automation earlier in the process, you get some additional valuable add-ons, too. You limit the accrual of technical debt. You shake out issues with unscripted testing first. More to the point, you can address testability issues sooner (yes, I've mentioned this multiple times during this conference. I completed "30 Days of Testability" and now I have it clearly on the brain. Testability should be addressed early and it should be addressed often. the more testable your application, the more Automizeable the application will be (Oh Alan Richardson I have so fallen in love with that word ;) (LOL!) ).