OK, so today we are going to be taking a look at "string interpolation" and some more techniques that you can use to make strings behave the way you want to and take advantage of some unique properties in Ruby. You can tell you are looking at a string when you see text in 'single' or "double" quotes.

We can use string formatters (that was the '%' character and the designator that follows, see yesterday's table for the list I found), but that has some overhead, including the fact that, if you want to do more than one entry, you need to use the bracket characters at the end of the line and separate the values by commas. Workable, yes, but less readable, too.


There is another way to put variables directly into a string, using that fancy term I mentioned before; string interpolation. That really just means "hey, when you see these characters together, it means take the variable value and replace it inside the string. The format for doing that is to use the "octothorpe" character (remember that from earlier in the week?) immediately followed by a left curly brace, the variable name, and then a closing curly brace. Like this: #{variable_name}. So the answer to the question from comments: When is a comment character not a comment character? when it's paired with two curly braces. then it performs string interpolation. Woot!

The way we saw yesterday:


Even if you don't quite get what's going on, the second example is easier to read, even from a non coders perspective.

So our first exercise is as follows. Zed wants to have us write this out and tweak around with a bunch of variable substitiutions and print them to the screen. We also will be using shortened and abbreviated names. Remember when I said that longer, more descriptive names are helpful and make for readable code? I still stand by that, but for many, they like to make things short and tidy. Might as well get used to seeing it and working with it (but really) wnen possible, do with descriptive, it makes for code that self comments :) ).

[and here is what we have] 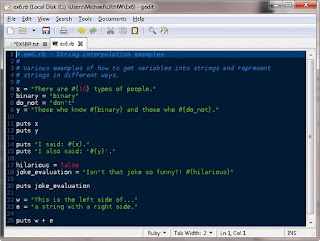 [and that is indeed what I see] 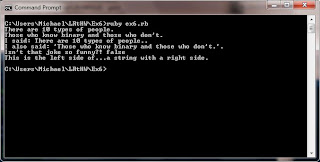 Go through this program and write a comment above each line explaining it. 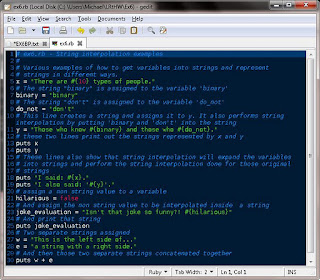 Find all the places where a string is put inside a string. There are four places.

Are you sure there's only four places? How do you know? Maybe I like lying.

[Since the (10) and the false are not in quotes, they are not literally strings in the defined sense, but since they are entered into the #{} directly with the case of 10 and false is passed for variable interpolation via #{hilarious}, it is treated like a string]

Explain why adding the two strings w and e with + makes a longer string.

So that's pretty cool. Any character value that we put between #{} will be presented and interpreted as a literal string. this makes sense as there are many Cucumber Web Steps that do exactly this, so it's nice to see the official definition of how/why it is done this way. Also, interpolation can be encapsulated, meaning if you perform string interpolation to one variable, assign it to another, and do string interpolation a second time with the newly assigned variable, the original interpretation gets carried over.
Posted by Michael Larsen at 7:32 AM