The whole point of running Selenium is so that we can interact with and work with different browsers and tet to make sure that interactions behave as they should, items appear where they should, and that our applications work in the environments that we want them to. Selenium WebDriver is designed to work with the major browsers currently on the market, so this chapter will show us how to interact with Chrome, Firefox, Internet Explorer and Opera. Each browser requires an executable be installed on the system, as well as the browser in question (the Firefox driver is already bundled with the Java client; it's what we've been using thus far in the examples):

So far, this is the approach we have been using up to this point. The example below shows a standard JUnit test: 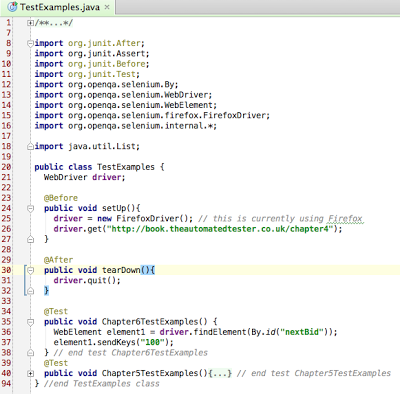 This example shows the bare basics of a test with no modifications.

In many cases, there are functions in the browser that a user may or may not want to have configured while they run their tests. To take advantage of this, a variety of profiles can be created, and the particular profile instance can be loaded and used. To do this, we:


Imagine that you wanted to have the book site be the startup page for Firefox. Below shows us how we can do that: 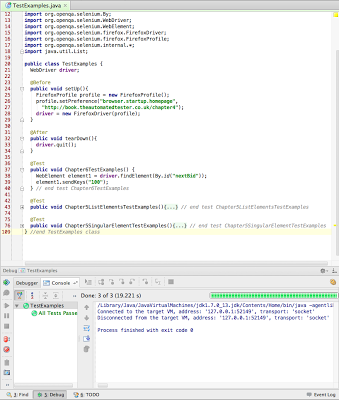 Another example that David shows us is that we can locate the firefox binary explicitly. By entering the path to the binary, we could load the version of firefox we want to use. The syntax would look like this, alas, I can't get the system to compile if I use this option: 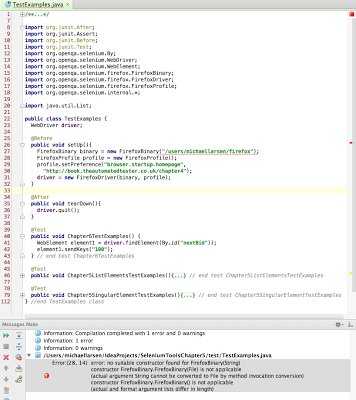 We can also point to a plug in using the following syntax: 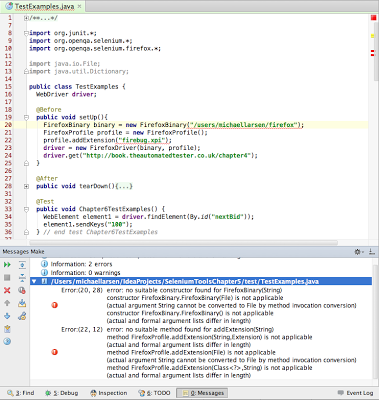 Alas, this too fails for us, and for the same reason. In fact, many of the items in this chapter have the same "fatal flaw". I think they look like great ideas, but why oh why can't I compile them?!


The whole point to WebDriver is to allow us to use multiple browsers, not just Firefox.

The next example shows us how we can load the ChromeDriver, and thus connect with Chrome. For this purpose, I took a copy of ChromeDriver and put it in /usr/bin so I could always rely on its position. With that, we compiled and ran, and lo and behold, here we are: 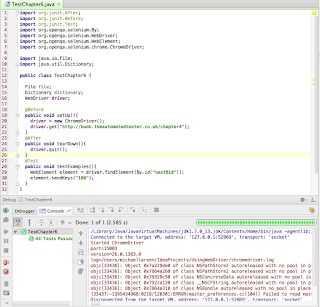 There's a fair amount of red down at the bottom, but don't be alarmed, that's the output from ChromeDriver. The thing to focus on is that ChromeDriver opens, and the test runs, and passes. Woot!!!


However, it looks like ChromeDriver and the extended examples suffers from the same issues as FirefoxDriver. Try as I might, this won't compile :( (this is the example to explicitly call out the file location. IT's complaining that it expects a string, not a file. Remove the File declaration, and it does the same thing. I'm at a loss. Java peoples, please tell me, it it me, or is something missing from this example?): 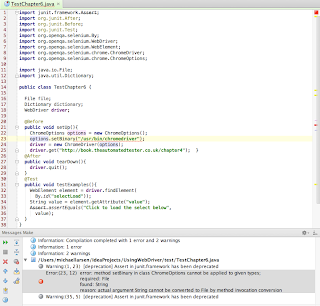 Opera, likewise, has a driver that lets WebDriver access and run it. Let's have a look!

To load Opera, we need to get the operadriver.jar file and for good measure, associated it with the project. Once we do that, it's all good to go. Granted, the test need some tweaking. Look for the spelling errors for the words "Chapter 4" (should be "Chapter4") and "index" (should be "Index"). Once you fix those, hey, you're golden: 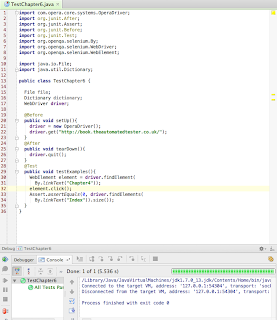 Well, OK,; not completely golden. Those astute viewers will notice I did a little cheat here. I set the assert value to be zero. This means it will return a true even if the element isn't there. Why would I do such a thing? I wanted to show a completed test. Alas, the element I'm looking for stubbornly refuses to respond (it may be my system settings, I'll tweak with them some more later). Just to show you the full story, set the asset value to equal one, and here's what I get, at least as of right now: 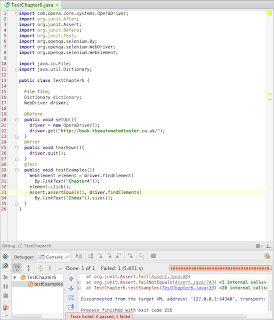 Opera also has a profile that can be adjusted. The below example turns off geolocation, and then runs the same test as before: 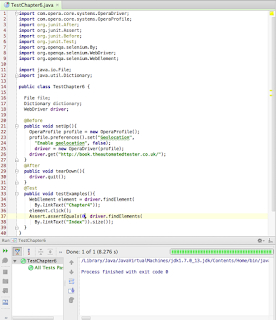 As we can see the test passes (but I set the size to zero to get it to do that. Again, I need to poke around just a bit more).

First off, I need to say how exciting it is to see this next step. One of my frustrations of two years ago was that Selenium RC was having major issues with running on 64 Bit Windows 7 at the time. Today, WebDriver does not have that issue, and the steps to get it up and running were actually fairly easy. For those who want to get up and running on Windows 7 64 bit, here's all it takes:

Once you do that, create your Java class file, put in some simple commands, including calling the InternetExplorerDriver class, and let it run. If you do as above, this should be what you see (along with an IE browser running the commands): 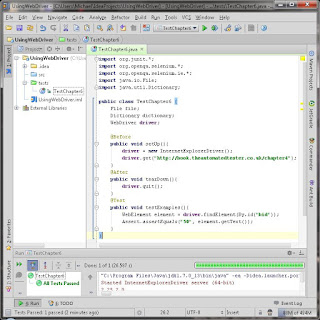 OK, wow, that was pretty cool. That's four different browsers we can drive and little in the way of tweaking top get them to do their things. I must admit, I'm a bit frustrated about the File and Dictionary calls, as well as the compilation errors. I followed all of the steps as requested but alas, many of these examples were for naught. I really would like to understand why they are not doing what they are supposed to do, and if there's a way to make these work as printed. Again, is this because of me using Darwin and not Linux? Is it something special about Java 7? Do the examples rely on something that is now deprecated? Either way, we were able to set something running for all four browsers, and the fact I could get it to work on Windows has me somewhat elated.