As David rightly points out, Mobile is the current "killer app" for our times. Some might even say it's the "killer paradigm" in the sense it is adding a whole new slew of approaches and considerations to testing. This section will look at how to get into and use three mobile platforms; Android, MobileOpera and iOS.

Note: The tests in question will be using emulators for this chapter. Real app testing, however, should be performed on real devices (the emulator will only tell part of the story).

The following example requires three things. First, you need an Android emulator, and to do that, you can download the Android SDK from:


Do you wish to create a custom hardware profile [no]
Created AVD 'my_android' based on Android 4.2, ARM (armeabi-v7a) processor,
with the following hardware config:
hw.lcd.density=240
vm.heapSize=48
hw.ramSize=512 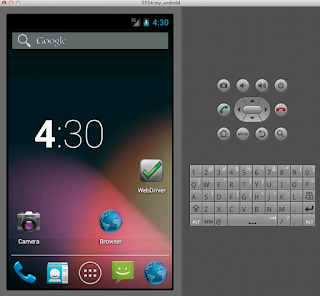 With that, let's try a test we're already familiar with... 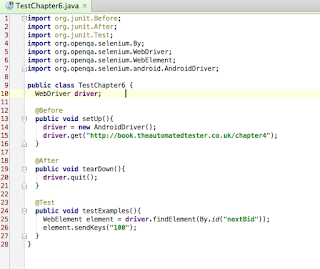 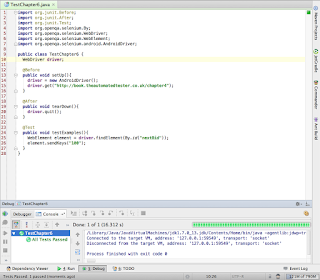 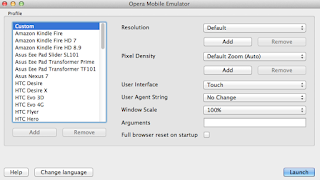 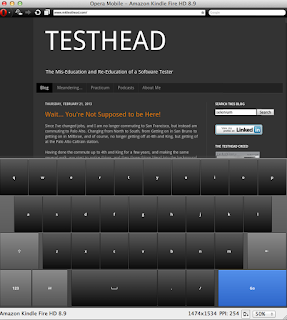 Making a test is much the same as previous examples, in that we are defining in the setup stage what driver will actually open. In this case, driver will open OperaMobile, with some parameters that David has provided, including a path to the executable (which, in this instance actually compiles :) ). 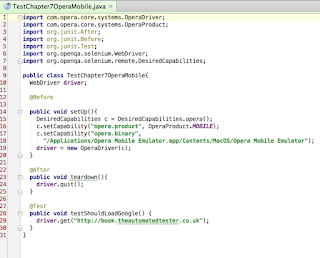 From there, we can compile (success), and run our test (not successful): 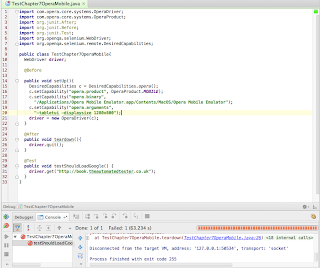 2. In the @Before setUp() block, put the following line:

With all things being equal, that's pretty much all you have to do to make a test that will run on iPhone.