Up In the Air

One of the things I like about the scouting events that we do is the fact that we can get out and try some things that are a little out of the ordinary. Now that my son is a bit older, and a little bit "been there, done that" I often find ways to get my daughters in on the act, too. this past weekend, my youngest daughter wanted to come with us to the rocket launches that were happening at Moffett Field (these launches had been scrubbed twice, so this time was the charm). the plus side, this was a chance for my daughter to try out a few different rockets of different power levels, see how they performed and see how she would adapt launch to launch. 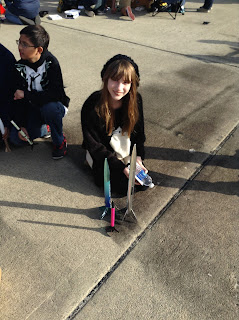 We had some fun staging each of the rockets, getting them checked in, packing the cylinders with wadding and seeing how much was necessary, how much was too much, and how much would turn out to be too little (more on that later). As we got the rockets checked in, each rocket would be given a launch assignment (meaning a numbered pad that they could set up on; there were thirty pad running. 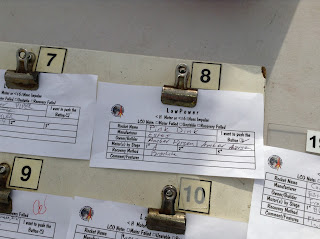 As we went through the day, we tried a variety of the rockets to see how they responded, and what would be the best setup for each. Early on we realized that the A class rocket wasted a lot of energy just getting up the support pole. A simple solution? Take a clothes pin and put it near the middle of the support rod. This gave the rocket enough stabilization to get a true flight and less fuel was wasted getting up in the air, which made for higher and better sustained flights.

The B Class rocket worked fine as is, and there wasn't much we had to do to get it up and into the air. three pieces of wadding, a folded up parachute, and an engine with an igniter was all that was needed. It flew flawlessly each time. 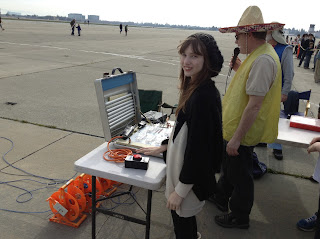 Our C class rocket proved to be interesting, in that it flew much higher than the other two. It also deployed way up in the air, but as we watched it, we noticed it was coming down really fast, as well as a long way away from the launch pad. we went to go retrieve it and after a bit of a walk (compared to the other rockets), we found it. It was sitting in the grass between the two main runways at Moffett field, standing at about a 15 degree angle. One of the fins stuck the landing (none broken, thank goodness) and the rocket was, all told, in perfect shape, save one thing... the parachute was nowhere to be found. Just the strings remained, and all the loops were in place. This could only mean one thing... the chute must have burned up during deployment and recovery. We thought three pieces of wadding would be sufficient. Apparently for a C class engine, a bit more is needed. 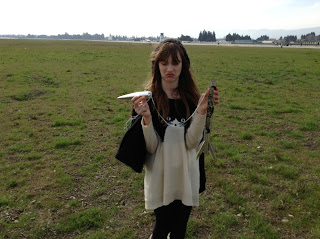 I'm glad that she was able to have this experience. She had a lot of fun, and it was really great to see her respond to the challenges, fix them, and launch the rockets again. I explained that, like in testing, we often try things out as experiments. Sometimes they work the first time, but often, they require adjustments, patience, and some last minute fix-it to make everything work. I have a sneaking suspicion this will not be the only time we do this :).

Posted by Michael Larsen at 3:03 PM