Another Day, Another Live(ish) blog from Øredev 2013

Good morning everyone and welcome to day three of Øredev (yes, I was traveling for the first day of the conference, so you will need to look through #oredev tweets or other people’s blogs to see the first day’s contents). Networking is spotty here. Sometimes it works and sometimes it doesn’t, so I will try to update these details when I can. 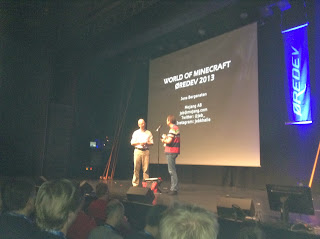 One of the first session highlights was to show how Julian Harty has been gathering and purchasing Kindles for schools in Kenya. He has shown how, but using second hand and refurbished materials (3G wifi hotspots, solar panel packs, power cable distributions, etc., and they are distributed to a number of schools, so that gift vouchers, free books, etc. can be distributed to the Kindles, and the ability to change the world is being achieved, one school and one student at a time.

World of Minecraft with Jens Bergensten
The morning keynote started where the conference organizer introduced his 9 year old son, and mentioned how, at his age, he would now be starting to learn English, and during the process of the introduction, it was clear that the boy knew more than a year’s worth of English. Why? Because he had been playing for years the world of Minecraft. With that, it was shown how a generation of kids have learned a significant amount of English through playing and interacting with the game. 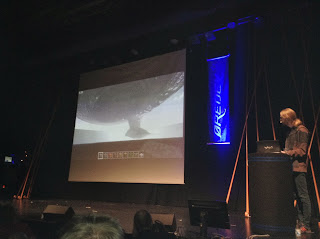 Minecraft is a game that has been developed in Stockholm, Sweden, and have about 30 million users worldwide. Though it’s several years old now, they still sell tends of thousands of copies each day.  What is the cultural impact? You can see it in a variety of game magazines, it’s shown up in South Park, and various late night television shows. It’s used as an education tool in about 1300 schools. It’s used to teach geography, geology, history, math, architecture, programming, etc. It’s been said that it may be the only tool to be used in all education levels (primary through university).  This game has become a game changer to go beyond just schools, but also is being used with world development initiatives like blockbyblock.org and UN-Habitat. The idea behind Minecraft is that it is meant to teach children how to create, rather than the typical option of games that focus on blowing things up.

Minecraft was originally developed by Markus ‘Notch’ Persson,  Games like “Infiniminer” were influential on helping to develop the ideas behind Minecraft. From the beginning, Minecraft was created to be simple. It’s a classic “pixel game”, and everything is boxes. It’s like legos for the Internet generation. Example video of the early days of development showed how people have made small projects all the way up to mega objects like a 1:1 model of the Start Trek ship Enterprise. It’s been described as being like Lego with infinite bricks. From simple to complex structures, all is open to the players depending on the resources they gather and implemented. One of the interesting things to see is just how much can be done in Minecraft to simulate construction and building of projects using nothing but a variety of blocks. 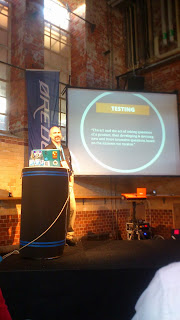 My talk was next, and this time, I attempted to do a live demo of Socialtext wikiQTests and how we interact with them, use them, and how they fit into my overall talk which is leveraging concepts of ATDD, GUI Automation and Exploratory Testing. I say attempted to because, with me in Sweden, and our test servers being in California, the execution delay was just too great, and it would have resulted in too much dead air. I did, however, do some screen captures and restructured the presentation, so I now have a Prezi presentation that shows the newly revised version. For those who want to see the presentation as it currently stands, go here :).

After my presentation, I sat down with Scott Barber to be interviewed for "Geek Speak", which is a video program for Smartbear. We talked about my being invited to Øredev, and the idea that our messages were being well received and quite popular sessions. I also talked a bit about the BBST courses offered by AST and the SummerQAmp program and what they are about. If we got a good recording, I think it should be posted in the next few weeks, so when it is, I'll let you all know :).

I hopped into Anne-Marie Charrett's "Coaching for Testers" talk, which was augmented and made even more fun by the fact that her two subjects (James Bach and Michael Bolton) were both in the session and offering color commentary on the examples and the intended actions and takeaways. I've seen variations of this talk before, but I like to see how she tailors this talk for different audiences. Good fun, and lunch time. I'm hungry, so I'll see you all later :).

After lunch, I sat in on Cyrille Martraire’s talk “ Refactor Your Specs”. This talk centered around the idea of the  3 Amigos concept for creating specs and stories. Cyrille broke down the traditional method of writing specs and then changed up and showed where each group has specific skills that are able to contribute. The product owner, Programmer and tester all ned to be represented, and each needs to be active in the process.

Testers do not, and must not, wait until development is all done with a feature. Specs, for that matter, need not exist at all (gasp!). Wait, what? Active conversation, early and often, can be a big step into being rid of hard and concrete specifications. In organizations that use BDD, the Cucumber/Gherkin statements for your tests can be used as you specification and documentation steps. By treating these as living documents, we are able to keep them up to date, real and rational examples, that can be modified if necessary to be end user documentation or reference-able specifications.

I had a chance to sit down with James Bach in between sessions, and what had started as a casual conversation turned into something much deeper, and something I need to do a blog post all by itself for, but suffice it to say James gave me some excellent food for thought towards something I'd been wondering about for a long time, and am getting closer to wrapping proper vocabulary around it.


I missed the sessions during that time, but this brings home the fact that, sometimes, the most valuable interaction and lessons learned may come not inside of a session, but instead between peers and friends chatting at a table in the hallway. This counts as one of those times. 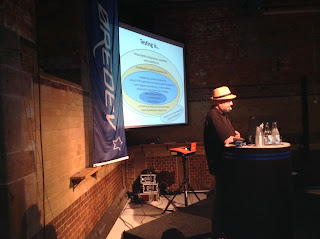 Michael Bolton did a sessions specifically focused on Regression testing, or what we think we mean when we talk about or focus on regression. What do we really mean when we talk about regression? Is it that we are afraid of things going backwards? Is it that we are afraid something will break due to our recent changes? Are we afraid of losing face because things seem to break that we have fixed it already?

One of the interesting things that Michael made a pint about, tangentially, is that test cases are treated as nouns, as things. Testing isn’t an object, it’s a performance, just like notes written on a sheet of paper are not music. It’s music notation. Performing the notes on the page, that performance, is music. So likewise with testing and test cases. test cases is to music notation as testing is to musical performance.

Michael made a point about checking, and that he feels he made a mistake early on in that he cast the discussion of checking vs. testing.  When we are doing fact checking, we are doing a part of testing, but calling it testing leaves out a lot of aspects of testing that  go beyond fact checking: forming hypothesis, observations, questioning, studying, modeling. Those are all aspects of testing that go beyond checking.

An interesting question... is regression really the biggest risk? Regression Problems are symptoms of the fact that, perhaps, we have a regression friendly environment. Maybe fear of regression is also a symptom. What do the costs of regression structure, and how it affects all of the things we could be doing, might also be worth looking into. More to the point, what tests do we leave on the table when we focus out of proportion energy on regression? It may be a worthwhile trade, but again, maybe we might want to consider what energy we are applying in these cases.

We now come down to the final talk of the night, and of the event. Linus Willeij is a long time and core committer to the Linux kernel, so it's a pretty good bet that, if you do anything in the world of computing,  you are running his code. The Fairlight movement was formed out of the West Coast Crackers movement, and was named after the synthesizer used by Jean Michel Jarre. Linus' talk was a restrospective of 25 years of the pirate group and what they accomplished (some may have conflicting opinions as to what that record is, of course). 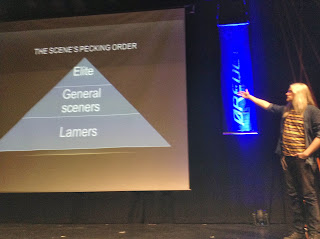 Linus was more focused on discussing "The Scene" that developed in the early 80's around computers, games, and ways to crack systems and gain access to them. Each community had a computer scene that was, in ways, analogous to music scenes in different communities and countries. In the early days, the scenes were predominantly middle class, white males. It was a self selecting group. There was no organization to join, no management to reign in people, your participation was determined by your participation.

We joke about people being called "elite" hackers today, but once upon a time, you actually had a real way of gating people. Elite hackers were really just those who had access to or owned fast modems. If you had a 28.8K modem in the late 80s/early 90s, you were pretty elite, you had something rare! There were many roles in the scenes, Suppliers, crackers, swappers, spreaders, phreakers, fixers, people who "carded". Additionally there were people who started making their own games and demos.

Why did this group get so big in Sweden? the first reason was that people were bored, and they wanted something to do. There was no game industry in Sweden, so people with interest in making games turned to cracking to fill the need. Linus has provided a retrospective on the techniques used by hackers in the run up from then until today, which has made for a very interesting historical tour.

With that, it's time to bid adieu (or "farväl" to keep in the Svensk ;) ), and I wish to give my thanks to everyone who made it possible for me to be here. To Maria Kedemo for inviting me, to Emily Holweck for making my travel arrangements and helping me to be as prepared for everything as possible, and to old and new friends. Thanks for making my time in Sweden so memorable.