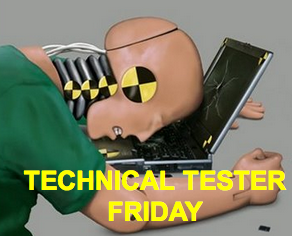 Last week, April 9th, as I was getting off the train, I stood up and reached over to grab my bag. The "twinge" I felt above my hip on my right side was a tell tale reminder. I have sciatica, and if I feel that twinge, I am not going to be in for a fun week or two. Sure enough, my premonition became reality. Within 48 hours, I was flat on my back, with little ability to move, and the very act of doing anything (including sleeping) became a monumental chore. To that end, that meant that my progress on anything that was not "mission critical" pretty much stopped. There was no update last Friday because there was nothing to report. I spent most of the last week with limited movement, a back brace, copious amounts of Ibuprofen, any typing only when I had to. I'm happy to report I'm getting much better, but siting for long stretches to code or write was still painful, though less so each day.

Since I'm greatly desirous to move forward, I decided to make a push in the later part of this week to clear the CodeCademy site's three courses related to web development: PHP, HTML/CSS and JavaScript. Late last night, I finished up the course for JavaScript. Yay me :)!!!

As an overall course and level of coverage, I have to give CodeCademy credit, they have put together a platform that is actually pretty good for a self-directed learner. It's not perfect, by any means, and the editor can be finicky at times, but it's flexible enough to allow for a lot of answers that would quality as correct, so you don't get frustrated if you don't pick their exact way of doing something.

Many of the hints offered for each of the lessons are also helpful and don't spoon feed too much to the participant, making you actually stretch and think. While I've known about and tinkered with JavaScript off and on for years, I will honestly say I've learned quite a bit from this courses. I would recommend these three courses (HTML/CSS, PHP and JavaScript) as a very good no cost first stop to learn about these topics. Each does a good job of explaining the topics and concepts individually.

If there was any criticism, it's that there is little in the course examples that integrate the ideas (at least so far). There is a course on jQuery, and I anticipate that that will probably have more to do with actual web component interaction and integration, so that's my next goal to complete. After that, I plan to go back and complete the Ruby and Python modules, and explore their API module as well.

For now, consider this is a modest victory dance, or in this case, a slow moving fist pump. I may need a week or two before I can actually dance ;). Also, next week I'll have some meat to add to this,s since I'm going to start covering some command-line level tools to play with and interact with, and those are a lot more fun to write about! 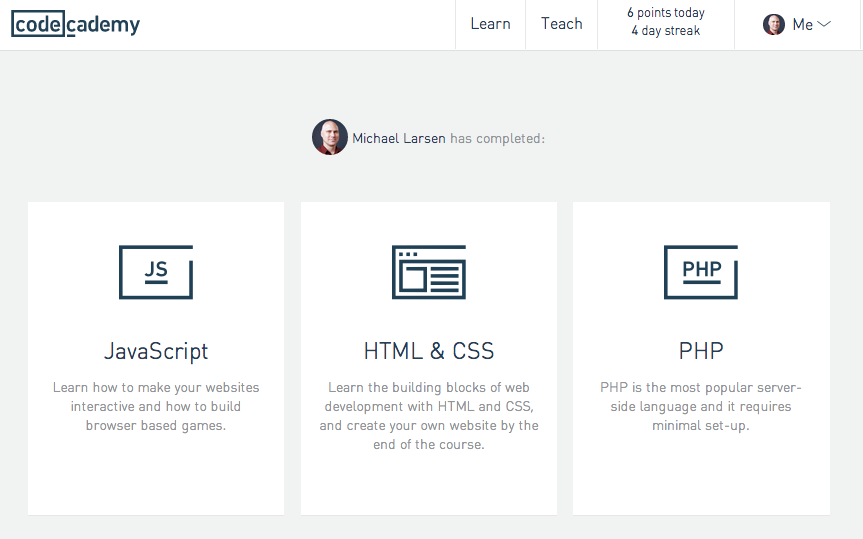