A Tester Invades Philmont: Lessons from the Trail

An event that I had trained for, lost a lot of weight for, and did a lot of practice runs with a scout troop to help make us eligible to participate in has come to an end. I've been home for a week now, and I've been able to think a bit on the various events, activities and opportunities to learn that I, and my Troop, were subjected to.

Six youth and two adult advisors took to the backcountry of the Sangre de Cristo mountains in New Mexico for two and a half weeks, and we all lived to tell the tale. It's a safe bet everyone who participated in this trek came back changed. For the next few posts, I'd like to talk about some of those changes, and what I learned while I was unplugged from civilization for that time. 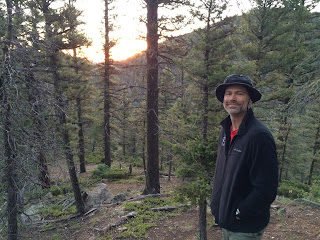 First, a little background. A part of my scout troop participated in a trek at Philmont Scout Ranch. Philmont is the largest of the USA High Adventure bases used by the Boy Scouts of America. Other properties used for High Adventure bases are Northern Tier (located in the Boundary Waters region of Minnesota), Florida Sea Base (located in the Florida Keys), and Summit Bechtel Reserve (located in the mountains of West Virginia), but Philmont is the one that most Scouts have heard of, and for many, it's the ultimate destination for a high adventure trek at least once in their scouting lives.

Crews are limited in size, from a minimum of seven to a maximum of twelve. All participant need to be at least fourteen years old. There are weight requirements and fitness requirements for both youth and adults to attend. We quickly learned that these were not suggestions, but genuinely necessary for successful completion of treks. For 2016, Philmont offers thirty-five possible treks for crews to take part in, and encourage early selection of a variety of options. Once you get assigned an Itinerary, that's the one you do, and everything is built around your itinerary. Ours was #10, which focused on going into the Northern part of the Philmont property, as well as hiking into regions of Carson National Forest and Valle Vidal, as well as going into places where trails and trail markers didn't exist, or at least would make the journey longer if we were to follow them.

An expedition is led by a Crew Leader, along with a Chaplain's Aide and a Wilderness Gia (Guide). All of these jobs are held by youth members of the expedition. Ideally, adults advise, but call no shots and get no votes on what the expedition does. Needless to say, what is ideal and what actually happens often doesn't line up, but more on that in a bit ;). We determined that "we advisors" would do little in the way of active management of the trek. We would offer suggestions, we would model behavior, we would give examples of things to do for the boys to learn from, but as much as was in our power, we would not interfere with their decisions or operations. This gave us ample opportunity to teach, but it also gave us ample opportunities to learn about group dynamics and leadership in general.

At the outset, I want to say that I am immensely proud of this expedition and what it accomplished while it was out in the field. I'll dare say I learned as much from them, if not more so, than they did from me. Still, there were some interesting observations I'd like to share.

Leadership is a Walk

If there was any one thing I wish I could go back and help train this expedition better to accomplish, it would be to see how they could execute on the plans they made. Leadership is more than making a plan and telling people the plan. That part is easy. The difficulty was actually getting the group to execute on what they agreed to do, and seeing the consequences of not executing. The two adult advisors shared a tent, as well as some common equipment. We both knew what we had, how much space it took, and what it would mean for us to carry it on our backs for ten days. Because of this, we split up our obligations. We split the gear, including the tent, and we knew what we needed to do. Each morning, we'd wake up 15 minutes prior to designated wake up, because that's just what a leader does; we know we have to take care of our own business before we can be of any help to anyone else.

We'd wake, stow our personal gear, break down our tent, finish packing our packs, put them in the pack line, and then we'd sit in a central area and wait for the boys to do their thing. Some mornings, we'd be waiting an hour or more for the leaders to wake up and get the rest of the group moving. Sure, it would be easy for us to walk over, tap on the tents, and remind the leaders what time they said they wanted to wake up. At times, we would, quite loudly, talk among ourselves to give the hint that they should be awake and active. Simple things that we took for granted seemed to be a challenge for some participants, such as setting an alarm to wake up, or to do something as simple as to ask one of the adults to use their alarm, and follow up with them to get them up on time.

Another stumbling block to execution was the stowing and transporting of shared expedition gear. Bear bags, ropes, carabiners, pots and camp stoves were the property of the entire group, so provisions had to be made for each item to be carried by someone. On several of the early days of the trek, the delay in getting everything packed was "who is going to carry (fill in the blank item)?". Everyone knew what they needed to carry that belonged to them, but allocating items that were expedition equipment seemed to be a recurring problem. Each day, someone waited to see who would make the first move to carry whichever item needed to be carried. Few were the ones willing to just divvy up the items and say "I'll carry this" and be done with it. This often meant that it might take an extra hour or two to sort who would take what.

Sure, I and the other adult leader could have just said "you take this" and "you carry that", but that went against the whole ethos of the trip. We were there as suggesters and as extra sets of hands. Needless to say, we often struggled with this. It's easy to say that you will step back and let the leaders lead, no matter how painful that process might be. At times, it truly was panful, because the solutions, at least to me, were so obvious. I realized, though, that was not entirely fair. I've had years of experience, both on the trail and in everyday life, where efficiency and effectiveness developed from many experiences where I was anything but. These boys were in a new world. They came to realize that saying they were leaders wasn't enough, they had to actually be leaders. At times, they would succeed. At times, they would fail. Usually, they would fail because they couldn't see a larger picture.

Each morning, we'd have to break camp and get to our next destination. Often, that next destination was anywhere from six to twelve miles away. That may not seem like much when walking city streets, but it takes on a different meaning when you are carrying fifty extra pounds on your back, have no set trails, and are at altitude over 9,000 feet. A term that I mentioned often was "hiking in the heat of the day". It was a very different experience hiking at six or seven in the morning than it was hiking at ten or eleven. The temperature could be as much as forty degrees higher (that's Fahrenheit, because we're American's, and we just use that system. I know in the rest of the world a forty degree difference means something significantly more ;) ). Still, that difference had a big impact on the progress of the rest of the day, and what energy reserves were left at the end of the hike to do things in the new base camp area. An early start meant a relatively quick hike, with plenty of energy and time to do program activities and relax a little bit. A late start often meant arriving at our camp late in the day, no time to do fun activities, and a scramble to get done what we needed to to get camp set up, dinner cooked, and to get some sleep before the next day. It tok a few times, but my comment of "hiking in the heat of the day" slowly started to sink in, and the group figured out what it needed to do to get a move on, so it wouldn't have to bake under the hot sun for too long each day.

I see many parallels in the work I do every day, in the way that I often lead testers and other engineers on my teams. It's so efficient to just tell people what to do, but real learning and expertise is rarely developed that way. Often, advising as to a course of action, and then stepping back and letting people do what they need to do is a much better option, but it is also filled with frustrations. It will rarely be done the way we want it to be done, or in the timely manner we would hope it would be done... at least, not at first. However, when people are held accountable for the execution of their plans, especially if they say they will do something a certain way, they will often meet up with those expectations over time.

It requires a willingness to walk a leader's walk, and at times, that willingness means being able to model correct principles, yet let people govern their own ways of actually accomplishing the goals they set. Yes, that includes dealing with the consequences of their actions (or inactions) at times. I frequently told the participants of our expeditions that the adults were ready an hour or two before they were, and as such, we just sat and waited, and of course we suffered through their delays and "hiking in the heat of the day", too. Over time, though, they came to internalize what they needed to do, and they also figured out how to cut their time from waking to walking down considerably. It's a shame we didn't have another ten days, as I think they would have been fantastic on a second leg. As it was, they were getting the hang of it by the time we ended the trek. Maybe they can carry it into the future and other activities they do. Time will tell :).
Posted by Michael Larsen at 6:54 AM