The Passion of the Champion: A Tester Invades Philmont

A couple of days ago, I shared the challenges that some of our youth leaders faced when they wanted to break camp and get to the next destination. Sometimes they had their act together. Many times they didn't. It would have been very easy for me to play the dictator and push and yell to get the team moving. I've done that before. It's very efficient, but it does nothing to develop actual leadership or confidence in abilities. 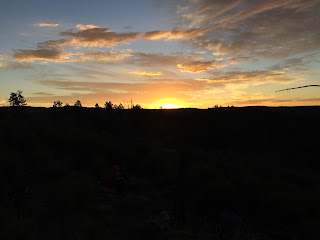 This was especially true the third day into our trek. Our Wilderness Gia wanted to do a special ceremony/presentation around the Leave No Trace principles. He'd planned out the whole thing, and was really looking forward to doing it. That third day, we had a late start, and we had to cover a lot of ground, much of which was unmarked and required us to climb and descend a ridge, cross a river, and make our way to that day's base camp. By the time we arrived, we were all bone tired, most of the day was gone, program areas were closing, and one of our boys was exhibiting signs of altitude sickness. Needless to say, I had to tell our Wilderness Gia that the ceremony he wanted to do wouldn't be possible today. Based on the performance of the group today, tomorrow wasn't looking too good either, but we'd figure something out.

The reaction I got back to those comments was both unexpected and slightly amusing. He fumed, looked at me with complete disbelief, frustration and shades of anger. He was really invested in having this ceremony take place. Seeing this, I looked over to my associate advisor, asked for a minute, and said "want to try an experiment?" My fellow advisor was game, and with that I returned back to our Gia and said:

"A sunset ceremony just isn't possible under the circumstances, but would you be willing to shoot for a sunrise ceremony? Look at the ridge line up there. It will take a little while to make the climb to the saddle, but we could do it in about an hour. Problem is, we are going up and over the ridge, so coming back for our stuff and doing it all again doesn't make sense. If you want the sunrise ceremony, you will need to make sure everyone is up, packed, and ready to leave camp at 5:00 a.m. That means waking up at 4:00 a.m. to make the departure time. Doable? Yes! Do I think you all will be able to? Surprise me :)!"

With that, I prepped for dinner, went to bed, and figured the sunrise ceremony would likely not happen. 4:00 a.m. rolls around, and what do I hear but the Gia up and about, waking his fellow trek mates, working with them to get out of their tents, those same tents broken down and packed, and hustling to get everyone ready to go. Each opportunity he came around, I asked if there was any cause I could lend my hands to (a phrase the crew got to know regularly; I didn't tell anyone what they should or shouldn't do, but if they asked me to do something, I was always ready and willing to do so). Needless to say, we got out of camp in record time, and we made the scramble up the ridge line to the saddle, found a great spot to set up, and he led us in an excellent presentation that included meditation, discussion and watching a beautiful clear sunrise come up over the Great Plains and peek through the Sangre de Cristo mountains. What's more, we had an easy downhill descent into the Valle Vidal, a flat walk to our re-provisioning spot, and the ability to arrive at our destination for the day at 10:00 a.m. We had plenty of time to set up camp, relax, make lunch, join in activities at the base came, and basically bask in the fact that today's mileage, while comparable to yesterday's, went faster and so much more comfortably.

What was the difference? One of the youth leaders was on fire. He was on a mission to make this ceremony happen. His drive helped carry everyone else along. He spelled out the importance, what it meant to him, and what he himself was willing to do to make it happen. As an adult leader, I do that all the time, but there's a considerable difference when a youth leader decides something is important enough to push the rest of the group along.

If there's an initiative you think is important, be a champion for it, but better yet, encourage others to champion that initiative alongside you. Our Gia wasn't successful just because he was persistent (don't get me wrong, that helped a lot ;) ). He was successful because he was able to get the other boys to share in his vision. He got them excited about doing what he had planned. That turned into action and results. More to the point, it gave them an excellent contrast between the rushed and harried pace of yesterday, and the nearly effortless and smooth feeling of today. I was able to use both mornings as models for what to do and what not to do. It would be great to say that they always made early morning camp breaks after that, but that would be untrue. We had our share of late days after this, too, but it made a stark contrast for them to see the difference in how they performed, and felt, comparing the late departure day to the early departure day. Over time, it became easy to help them share that narrative, and encourage them to get the early start on the day, but in those cases, someone else was able to champion a reason, and get others to rally around their flag.
Posted by Michael Larsen at 6:00 AM