One of the more entertaining aspects of our trek would have to be the final two days, in that we were joined by an expedition mate that, let's just say, is a little different than the average hiker: 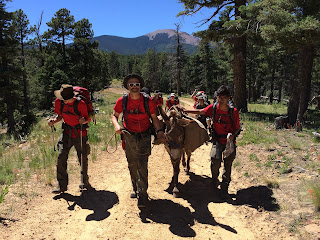 Actually, his real name is "30", which is the number he wears around his neck for identification purposes,  but part of the "Burro Expedition" experience is that each crew gets a burro to join them for two days, and the crew gets to name the burro for the duration of the trek. Needless to say, it would be impossible to keep track of the names changing all the time, so the burros are officially known by their numbers, but are also conditioned to respond to any name they get called.

During our trek, the boys talked a lot about the Anime series "Angel Beats" (which also happens to be one of my favorites), and we joked a lot about who our favorite character in the series was. That character was "T.K.", a long haired, always moving dancer who would speak in nonsensical English phrases (even in the original Japanese recording). When we met burro number 30, and he came up to us and looked at us with a circular head bob, we all laughed at the similarity to the movement T.K. did in the anime, and we all said "Hey, let's call him T.K.!" With that, T.K. became an official member of the crew, and would help us on the trek for the last twenty miles or so by carrying some of our gear for us.

As we were making our way to the Baldy Skyline camp area, we had a number of choices we could take to get there. As we scanned the area, we saw that there was a road that looked to be a straight shot up to the area, and pretty short by comparison. We started walking towards the camp and for the first bit of the stretch, T.K was walking alongside us and made no fuss. When we saw a fork in the road, and the trail that continued up to the camp area came into view, TK started walking that way, but we guided him back to the main road. Over the course of the next few minutes, TK walked slower and slower, and finally stopped. We tried to coax him forward, and we'd get a few steps in, and then he'd stop again. We did this about half a dozen times, and each time, it was getting to be progressively harder to move TK further up the road.

Additionally, as we looked at T.K., we had the impression he was looking at us as if to say "hey, you guys are all idiots! Did you see that trail that forked off the main road a while back? That's where we're supposed to go. Trust me, I've done this trek more than a few times, I know how to get there!" Still, we felt confident that our short cut would work and save us time, so we persevered. I've had experience leading horses and burros in the past, so I took it upon myself to hold his bridle and lead rope and coax him up the road, and ultimately, he let me lead him up the road.

The road we had chosen changed. It became steep. It was straight, sure, but it was also a laborious climb to get up to the ridge line where the camp was. It was tiring, it was in direct sunlight, and by the time we reached the top of the road and the ridge line, we realized that, while we were at the top of the hill, the actual camp area we needed to be at was still about two kilometers east. As we trudged to the camp area, we saw the trail converse with the upper road, and we also saw that the trail was coming out of a wooded area, with plenty of shade, the trail meandering through a range of switchbacks that, while longer in total distance, would have been much kinder to our knees and backs. As I looked at T.K., it felt as though he was saying "See, I told you you were an idiot! I could have led you here and saved you a lot of hassle, but no, you had to go your own way. How did that work out for you?"

Does this sound familiar? I know it does to me. I've had this experience with my teams. We are so sure that what we are going to do will save us time, it will be different than all the previous times we've tried to meet a goal, but someone, usually one with a lot of experience, puts up resistance and tries to point out what we should be doing. Often, that advice goes unheeded, only to come back and bite us later when we realize that the insight was valid, accurate, and based in experience, but our hopes and optimism for a faster way (or a looming deadline) blinds us to the hard earned experience.

I chuckled as I thought about this the following day, when we left the Baldy Skyline camp to head down to the next area and followed the main trail. T.K. just started going, and he barely stopped. He knew where he was, and he knew where we needed to go. Sure, we consulted our maps to be sure, but otherwise, the trail was the most direct route, and he just plowed ahead until we chose to call a halt for a rest break. During the remainder of the trek, as we were debating ways we should go, I'd quietly nudge T.K. to move forward, and I'd see where he wanted to go. Typically, I'd encourage following his lead, and each time, it would prove to be the most direct and easy to navigate route. Sure, it would have been more adventurous to bushwhack, but I'm sure T.K. appreciated not having to climb over or around felled trees or other obstacles.

There are times when new vistas are open to you, and there is no trail to follow, and one way is as good as any other. At times, though, there are those who have gone before us, and instinctively know when we are going the wrong way. It's wise to step back and listen to those who express reservations. Who know how much sweat and toil they might save us if we listen to them ;).
Posted by Michael Larsen at 6:00 AM