Wow, three days go by fast when you are typing like mad. This is the last formal talk before my workshop and after my workshop, the conference will be over. 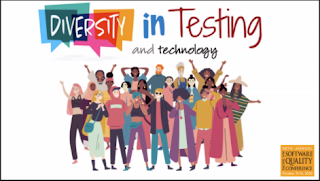 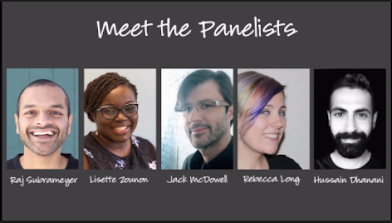 Tariq King is moderating this panel discussing the diversity in testing and technology and he's leading with "is it important if people aren't doing anything to promote it?"
Lisette has built several teams and she says that the teams need to match the users. If the users are diverse, then the teams need to likewise be diverse. Tariq also commented that diversity additionally means that designing for our users is often a way to drive revenues.
Raj pointed out that the world of work has changed, with teams spread out all over geographical areas so diversity is of course important because diversity exists somewhat by default, even if it's not intentional. even with that reality, there is still a lot of work that needs to be done to more effectively represent our customers and to have their involvement in the engineering and testing process.
Hussain In the individual contributor roles, there may be an overrepresentation of some groups but that definitely is not the case in management. Management skews heavily white and male. In ways, Education requirements can be a barrier, so google as an example is looking to offer a certificate program that, if implemented, will count the same as a degree. Rebecca mentioned that while this is a step, the question is how will that create new pathways up the career ladder.
Lisette points out that the individual contributor pipeline is relatively diverse but the people hiring are not diverse. When companies promote and help diverse candidates grow, they can become leaders in their organizations and become decision-makers for their companies.
Raj points out that often, mandates are made to say that "x number of people need to be diverse" but there's little emphasis beyond the numbers. Hiring is great but what matters is the path and opportunities for the hires beyond just filling seats. where will these people go in the future? Will they be seen as valuable team members, encouraged to move up, and rise up in the organization?
I'm happy to hear about Accessibility and diversity including individuals with disabilities. Yes, my wheelhouse, so let me crow a little ;). there are specific and unique challenges when dealing with neuro-diversity and ability-diversity that makes this challenging. If there is an opportunity to interview a hearing-impaired engineer, how will that interview be conducted? Is the burden of interviewing on the interviewer or interviewee. If an interpreter is needed, who is on the hook for that?
Tariq notes that successful teams are gauged on the amount of time they allow each other to speak, as well as to allow for the gender of the team members. It's interesting that successful teams tend to have more women involved. This mirrors my original experience with Cisco when the majority of the testing team was done by women engineers. Was that a fluke of Cisco or was that a broader tend when I hired on? I'll honestly never know but it was definitely an influence on me and my work over the years. I've long said that if it weren't for a cadre of women who helped me over the years, I might not be in this industry at all.
Lisette say that to just assume a woman would be an excellent fit for QA is wrong. It's interesting to me because I had wondered over the years if I was the odd one because I wanted to be a tester over those years I was at Cisco or that I was actively encouraged by women over those years to participate because that was their world and they were welcoming me in. as Cisco grew, it certainly seemed that the overall population of testers that were women was not as pronounced, though I would still say it was significant by the time I left Cisco in 2001.
As the father of two daughters and a son, I have actively encouraged my daughters to pursue the goals that they want to. One of my daughters wants to work in aviation, ultimately to become a pilot someday. To that end, I have encouraged my daughters every bit as much as my son and I actively want to see them succeed in whatever role they wish to participate in.
I am curious to see if COVID-19 and the cratering of expectations of working in a specific location long term might have on the overall attitude of who works where and when. Will this help to encourage a more diverse group of people to apply for jobs, especially if the older ex[pectation of packing up everything and moving someplace is not as actively sought after.
sadly, this is all i can track as I have a workshop to prepare for so I will bid adieu here but a great conversation and glad to hear it while I could :).
Posted by Michael Larsen at 2:39 PM