Well, this is an interesting surprise. Joel had another talk scheduled that I had heard at PNSQC last month and as I was considering what I might say that would be different, I see the slide with a very different subject. Cool. This means I get to react to something fresh and unique. 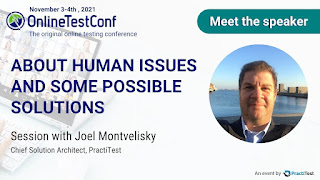 So have you ever done scenario-based testing? That's where we get to describe a person we want to test with. We want to use meaningful data about that person so we might invent some interesting details about them. I've done this a whole bunch and I use tools like Fake Name Generator and I can't count how many anime series I have mined for names and relationships to set up testing environments.

Okay, that's nerdy... but what's the point here? The point is that when I do this, I am setting up users, I'm setting up relationships, I'm setting up scenarios to look at. All of that is true. What am I missing? I'm missing genuine humanity. I'm using cartoon characters and some made-up details but I'm not really considering flesh and blood humans. More to the point, I'm expecting interactions and reactions that might actually be meaningful inside of tools where that humanity has been stripped away. We think we're being human but only in the most superficial of ways.

Joel's main point here is not about testing. It's literally about being human. There's a lot of weird things we as people deal with and regularly have to make sense of. Impostor syndrome is something so many people deal with. We fear that we don't have the right or the status/stature to hold an opinion or talk to it. Every presentation I give is plagued with this. I always wonder "why are people paying attention to anything I say?" Even though I've been doing these types of presentations for over a decade, and I've been focused on Accessibility as a primary topic for over six years now, I still wonder if what I'm saying makes sense, if I'm prepared, if I have actually got any insights that matter. After the fact, I realize yes but at that moment, I'm freaking out a little.

Joel also mentioned the Superman Complex, which is hilarious because I deal with this as well. Three decades as a scoutmaster has been a struggle because often I have to physically stop myself from doing all of the things. It takes serious restraint for me to not just jump in and take care of a lot of things. I have at times literally forced myself to sit on my hands and stand aside so that things can get done by others. Yes, it hurts at times.

Do you ever suffer through a case of  "historical myopia"? I laugh about this because I'm literally hearing people talking about how great the music of the 80s was. the reason I laugh is I have vivid memories of so many people talking about how much the music of that time SUCKED!!! Did it somehow become better over the ensuing three decades? No, our memories have become more selective. We are filtering and remembering the best of the best. It's easy to do with a somewhat distant past. It's a lot harder to do that with a current present and a future that is yet to be written. Truth is a lot of stuff in the past was terrible and a lot of the stuff going on now is going to be vindicated to be way better than we consider it in the here and now.

Oftentimes we want to focus on that "fresh start" vibe and we often put strange rituals around them. Why do I want to focus on better fitness but have to wait until Monday? Why do I want to save money but I need to focus on the next month to start it right? Why do I need to wait until I get back from vacation to eat more healthily? The reason is we tend to feel like we will be more successful if we have a formal ritual to point to (this is why New Years Resolutions are so popular). Rituals have power but we give them too much power at times. What makes any day, hour, or minute better than "RIGHT NOW" to make a change or a determination to do something? the answer is, it doesn't, it just allows us to delay/defer making a decision or a commitment when we don't really want to.. If we really wanted to be doing something, we would be doing it now, no delay, no ritual required. We'd just step up and we'd do it. 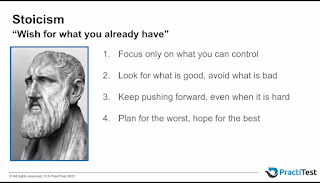 I appreciated this slide as I think it really does encapsulate what we actually have some control over. It's a way that we can be prepared, be mindful, and be focused without beating ourselves up for the things we can't actually control. This won't cure us of pessimism, it won't solve our imposter syndrome. It won't assuage our guilt or our misgivings but what it will do is it will help ground us and give us some perspective that we can use to our advantage.