It has been a while since I've seen a talk that referenced Deming. For those wondering what that means, Steve Hoeg is talking about Dr. William Edwards Deming, who was an American engineer, statistician, professor, author, lecturer, and management consultant. He helped develop the sampling techniques still used by the U.S. Department of the Census and the Bureau of Labor Statistics, as well as studying the techniques of Japanese Manufacturing and Assembly. His key idea was that defects were not free but had a significant cost. In the role of looking at Japan's recovery from World War II, Deming developed principles that later on helped cement him as the "Father of Quality". 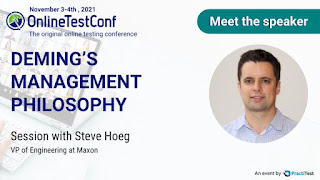 To understand Deming's ideas and how his principles helped to shape Japanese Manufacturing (where companies like Toyota were devastating the US auto industry, showing how Japan was able to make higher quality products at lower costs). Deming is most well known (at least to me) for his 14 points of quality, which I have put down here. Roll through these to understand the context of Steve's talk:

1. Create constancy of purpose toward improvement of product and service, with the aim to become competitive and to stay in business, and to provide jobs.

2. Adopt the new philosophy. We are in a new economic age. Western management must awaken to the challenge, must learn their responsibilities, and take on leadership for change.

3. Cease dependence on inspection to achieve quality. Eliminate the need for inspection on a mass basis by building quality into the product in the first place.

4. End the practice of awarding business on the basis of price tag. Instead, minimize total cost. Move toward a single supplier for any one item, on a long-term relationship of loyalty and trust.

5. Improve constantly and forever the system of production and service, to improve quality and productivity, and thus constantly decrease costs.

6. Institute training on the job.

7. Institute leadership. The aim of supervision should be to help people and machines and gadgets to do a better job. Supervision of management is in need of overhaul, as well as supervision of production workers.

8. Drive out fear, so that everyone may work effectively for the company.

9. Break down barriers between departments. People in research, design, sales, and production must work as a team, to foresee problems of production and in use that may be encountered with the product or service.

10. Eliminate slogans, exhortations, and targets for the workforce asking for zero defects and new levels of productivity. Such exhortations only create adversarial relationships, as the bulk of the causes of low quality and low productivity belong to the system and thus lie beyond the power of the workforce.

12a. Remove barriers that rob the hourly worker of his right to pride of workmanship. The responsibility of supervisors must be changed from sheer numbers to quality.

12b. Remove barriers that rob people in management and in the engineering of their right to pride of workmanship. This means, inter alia, abolishment of the annual or merit rating and of management by objective.

13. Institute a vigorous program of education and self-improvement.

In addition to the 14 points, he also identified five Deadly Diseases companies dealt with:

5. Over-reliance on visible metrics (interesting observation for a statistician)

The big factor of Demin's points is not that each one of them is important but that it is a holistic process.  Steve mentioned a Deming example called the Funnel test, where it takes a set system (like a funnel) and sees where the balls dropped into it actually land. One would expect that the process would be so precise that everything would hit the right place. In truth, there's a lot of calibration necessary, and getting it all right means there is a lot of errors and issues to work through and recalibrate.

Deming wanted to link his teachings together in a large Venn diagram that was called the System of Profound knowledge: 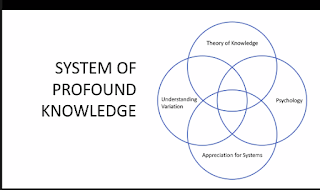 The biggest problem Deming reported was that companies would take one or two principles and try to apply them and then wonder why little if anything changed. It's one thing to copy principles. It's another thing entirely to actually know, embrace, and apply a unified theory into a cohesive system of practice. they can't be understood by breaking them down to other component parts. they need to be practiced together in the entire collection and their relationships to understand and implement the system.
An example of the US auto industry was that they were inspecting and reverse-engineering their construction and while looking at individual parts, they couldn't understand the differences. It wasn't until they started looking at the entire assembly process that they recognized how well items fit together and how standardization (actual standardization of parts and pieces) made the assembly easier and more sound/effective.
Additionally, creating conflict and competition between co-workers did not motivate teams. Instead, it had the opposite effect. Rather than stack ranking and providing bonuses, encourage pride in work and acknowledgment of effort for everyone. Running good teams outpaces and outweighs rewarding individuals.
Much thanks, Steve, it's been a few years since I examined Deming's points. Excellent update and reconsideration :).
Posted by Michael Larsen at 11:15 AM