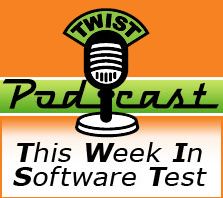 Today marks a milestone. This morning, Episode 131 of This Week in Software Testing has been posted. In it, we conclude the series of Matt Heusser's keynote adress at the Pacific Northwest Software Quality Conference (Part 1 and Part 2 can be obtained here).

It's been a lot of fun, I've learned a lot along the way... and you can probably tell with this buildup that there's a change in the air.

Matt and I have decided that, for now, we are going to put the TWiST podcast on hiatus. No, there's no bad blood between Matt and me (as a musician, I am very familiar with the first question asked whenever a project goes on hiatus; it's assumed that there must have been a fight of some kind). We decided to take stock of what we have covered, who we have talked to and areas that may yet to be covered, and decided that now was a good time to take a breather after two and a half years of weekly production work.

We both love producing this podcast, so for those thinking it's going to go away forever, rest assured, that is not our plan. We both, however, want to take the time to focus on some other opportunities for a bit, and give those projects a chance to get some atmosphere to breathe (there are, after all, only so many hours in a given week that we can devote to those opportunities).

To those who have helped make this a fantastic journey, my thanks. To Matt, first and foremost, for being willing to be in the hot seat week after week, in one way or another, either in interviewing, gathering talent for discussions, or recording "on location" events along with me.

Thanks to our recurring "panel guests" over the past year plus, who helped us make for some great conversations, with special thanks to Benjamin Yaroch and Wade Wachs for their frequent contributions and going above and beyond the call so many times.

Thanks to everyone we have interviewed over the past two and a half years. It's your stories and your experiences that make the show what it is.

Thanks to the people behind the scenes these past two and a half years who have helped with show production, editing, and distribution (Rick Baucom, Rich Hand, Thomas Ponnet, Justin Rohrman, Janette Rovansek, Mark Tomlinson and Farid Vaswani).

Most of all though, thanks go out to YOU, our listeners. You are the reason that we were able to put out "the best software podcast we were going to put out this week (by some definition of best)", week after week. We hope that you have enjoyed these presentations, and will continue to enjoy them well into the future. We look forward to coming back and following the pulse of the software testing world in the not too distant future.

Until then, thanks for listening, and keep discovering :).

Regards,
Michael and Matt
Posted by Michael Larsen at 5:00 AM

The best has not yet happened. You guys did not get me on the podcast!

All the more reason to make sure we get you on when we resume, KungFu Panda :).