Scaling QA With Docker, Jenkins and Mesos - Live from #AgileTD

Adé Mochtar & Maarten van den Ende put together a workshop based around the idea that we don't have to spend so much time manually setting up Selenium Grids. What's more, each of us were given a USB stick with the files and exercises to work with. The goal of the sessions is to be able to set up scalable and solid Selenium Grids, as well as writing maintainable and scalable Selenium / WebDriver tests.

At the moment, we have been setting up our environments so that we can load the environment and get it up and running. If you haven't seen much of me the past hour, well, that's why ;). 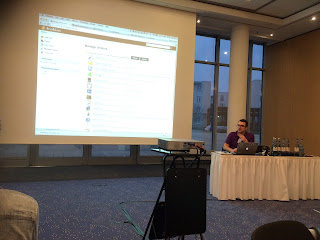 There are a bunch of components that are part of this package, including vagrant, selenium, selenium grid, jenkins, docker, a few virtualbox machines and scheduler called Mesos. For this process of scaling Selenium Grid, even in this small example, Mesos gives the flexibility that will allow as many CPUs and RAM that you can throw at the system. In our example, the CPU's are limited to the number of virtual machines we have created and are spinning up.

One additional cool aspect of Mesos is that it's a generic scheduler. It can be used to schedule anything, so any test and configuration can be run using it.

Very interesting model, I've just barely scratched the surface, but I am curious to play with it some more, seeing as I have it set up and all that :).
Posted by Michael Larsen at 7:25 AM