The talk is a little misleading by the title. The talk is called "Testers Are Dying" and my first reaction was "OK, joy, another 'testing is dead' talk" but no, not really. The real issue is not that testing is going away, we actually need to keep up with the demand for testing.

But wait, how is there an increase of testing demand while we are seeing the role of traditional testing disappear?  What gives? 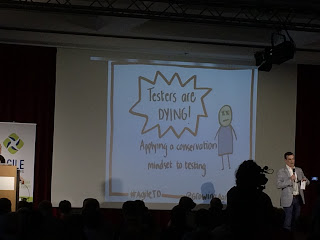 The fact is a number of companies have taken  steps to either eliminate or greatly reduce the headcount of their test teams. Yet there's more testing needed than ever. Again, what gives?

In many ways, we are dealing with a situation where multiple people are focused on a need for testing, but we have a shortage of people that need to use it. Going forward, the chances are the dedicated role will continue to see attrition, while the actual efforts and needs for them will increase.


The challenge that I see is that there is a dis-connect happening between the need for good testing and the questioning of the value of dedicated testers. If the issue is that the testers are seen as being of limited value, then there are two possible courses of action. Remove the testers (generally a bad idea) or improve the quality and understanding of the testing being performed, and extending the value of that testing to more and more people. Paradoxically, the more people are involved in the testing activities, the more likely dedicated testers will be retained, because the value of their efforts and what they bring to the table becomes clearer the more people actually test (shocking, isn't it ;)?).

Additionally, skills increases can help to make it possible for testers to leverage their skills. If the challenge is too many testers but, not enough testing, then having software testers that are very good at testing being able to spread the skills they have around, and encourage/effect the other members of their team will be a net positive. On the whole, many software testers are not so much dead weight but radically underutilized, or utilized in a very poor way. By having testers get involved earlier in the process, and having testing performed by as many people as possible, the visibility of testing improves, and an understanding of what testing actually is grows.