Keep Your Project off the Autopsy Slab: #PNSQC Live Blog 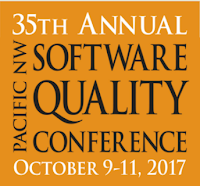 All right, my talk is over, and from what I can tell from the comments back it seems to have gone over well :). Lunch was good and we got to get into the 35th Anniversary cake. The committee also put out cupcakes and I'm pretty sure this had to have been put out there as a joke:

The first talk for the afternoon is to talk about Pre-Mortems, with the subtitle of "Keep Your Project off the Autopsy Slab". To make it simple, there'are three basic things to consider in a pre-mortem:

1. Something has failed.
2. You and a group have determined and found the issue.
3. Steps are put in place so that the issue doesn't happen again.

Put simply, projects frequently fail, and they fail for predictable reasons. Sometimes they are event-based, such as a person quits, or the schedule changes, or an integration is needed. Sometimes it's people related, such as a skill set is missing, or someone is not dedicated to the project. At times the culture works negatively, such as fostering overt competitiveness or being overly skeptical. Additionally, the goal to get it out there overrides the willingness and ability to do the job right. Technology can be a problem, as in external third party software elements seem great on paper but we end up struggling to try to use it.

One additional issue that can sabotage a project is a lack of knowledge, specifically with the idea of "unknown unknowns" as in "we don't know it and we don't even know we don't know it".

If we are looking at a pre-mortem as a way to get a feel for where things are likely to go, we first have to identify as many risks as possible, but just as important is determining if, and how, it will be possible to mitigate those risks. Mitigation is an oddball term, in that it's not entirely clear as to what we are doing. Are we minimizing risk? Reducing risk? In general, it's lessening the impact of risk as much as possible.

There are eleven ideas to consider with pre-mortems: