The Good, The Bad and the Ho-Hum: #PNSQC Live Blog Continues

One of my favorite parts of coming to PNSQC is the fact that it has a high rate of recidivism. A lot of the attendees have been several times and it's great fun getting back in touch and catching up between sessions. I met my friend Bill here at PNSQC in 2010, and what we find hilarious is that, even though we both live in the Bay Area, it seems we only see each other here at PNSQC ;). 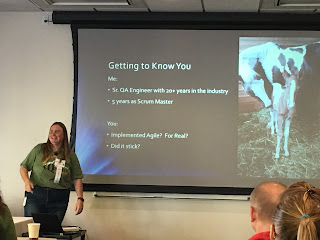 Heather Wilcox leads off the breakout track talks with a talk called "Four Years of Scrum: The Good, The Bad and the Ho-Hum". For the record, I work in a Kanban shop currently but worked in a Scrum shop from 2011-2012. Prior to that, none of the companies I worked for could be considered Agile (not for lack of trying for the last company I worked for up through 2010). What I've experienced is that each company does Agile just a little bit differently, and in many cases, they think they are doing Agile, but not really.

Heather described how in the early part of the process of getting to Agile, they were often performing the rituals of Agile, but they were not really sharing those rituals with other teams. As I have experienced that in a small way in the past, it's not often a recipe for success, especially since you have to explain Agile principles in a non-Agile space. Sounds like it wouldn't be much of a big deal, but you would be surprised.

What Heather described was the way that they implemented and perfected their practices, and in some cases, they determined that they were going to do things that were non-standard and that they were OK with it. Her team does things that may be considered unorthodox. Their teams are somewhat Siloed, they use various Agile Methodologies, some teams do formal scrum or wing it on a theme of Scrum.

Her direct teams use standups, planning meetings, demos, retros, chartering and a focus on "The Goal" which is to respect and preserve Scrum ceremonies while being as mindful of time as possible. I like that Heather uses the terms "Scrum Ceremonies" so freely because, in many ways, we don't want to admit that we are somewhat beholden to "rituals". If they do a demo, they only demo when they have something interesting to show. Retros are done with the same rules and techniques each time so as to let the team know what they need to do and be prepared for. As long as it works, that will be what they do. If it stops working, they will change the process, so long as it gets them closer to the overall goal.

To put it simply, no. When predictable but not precise is important, or there are small changes being made that can be accomplished in a sprint or two, then it works very well (and that tends to correlate with my own experience). When dealing with a hard stop date or having to focus on a large project, and there just doesn't seem to be a way to break this down, Scrum itself starts to break down. Regardless, it's been determined that points matter, and that those points are vital to being consistent. Their planning improves considerably when points are adhered to. They also help avoid massive stories. In short, Scrum is a technique, it's a planning approach, it's a methodology, but it is not gospel and it need not be ironclad. There is a discipline requirement and it can be uncomfortable, but it allows for flexibility if done correctly.

Just to let you all know it will be awhile until my next update because I'm delivering my talk next :). I will do a "somewhat summary" of that after the conference.
Posted by Michael Larsen at 10:59 AM