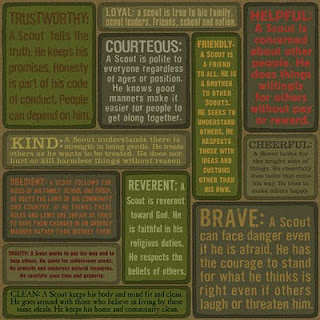 This is the seventh of a 12 part series.

As many of you know, outside of testing and raising a family, my single biggest time commitment is being a Boy Scout Leader. Over the past couple of years, I’ve seen and heard various presentations regarding a code of ethics around (teaching, development, testing, governance, fill in the blank). Each time I’ve heard or read these statements I’ve caught myself saying the same thing…  “If everyone just lived by the Scout Law, we wouldn’t need this patchwork blanket of ethics rules and codes of conduct”.

My “challenge” now is to see if I really could map Testing to the Twelve Points of the Scout Law.

A Tester is… Obedient


I am willing to bet there are a few eye-rolls on this one. This is a word that as adults, we tend to chafe at. We want to say that we “question authority” and that we can think for ourselves. Obedience is often lumped in with puppies and small children, and an attitude of “do what you’re told!”. I’m going to argue that that is not real obedience, and I certainly do not advocate blind obedience.

When I refer to the Scout Law and say “a Scout is obedient”, I am referring to such things as the rules of being part of their families, schools, sports teams and yes, troops. In addition, Scouts also obey laws set by their communities and countries. If they feel that the rules and laws are unfair or unjust, they work within the system to have them changed, in a civil and orderly manner, rather than just choosing to not obey the rules. Blind obedience, doing what you are told and never questioning why, is every bit as bad as blindly rebelling (thinking of Marlon Brando’s character in “The Wild One” where the woman in the bar asks “what are you rebelling against” and he says “what have you got?”). Scouts who are allowed to question authority and assert a bit of independent thought and action are more likely to form a solid ethical foundation for their future, more so than those who just follow the rules, without question.

Likewise, testers who are allowed to question premises and test against the boundaries of situations are likely to find more problems than those who just “follow the script” they have been given. Testers need to see the big picture; without that big picture, they will find themselves stuck in a trap, testing without understanding what or why. Once a tester knows what they need to test for, however, they need to be able to determine an authoritative answer for their findings. Test oracles are set up so that we can make legitimate comparisons, and based on those oracles, we can say whether a system works or a system doesn’t work. For that determination, we have to be willing to set up the rules that we need to define the test, and then we have to follow those rules to ensure an accurate result. I would hazard that few testers would argue that “being obedient” in those situations is a bad thing :).
Posted by Michael Larsen at 6:00 AM