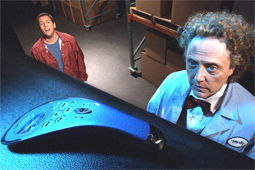 Over the last five days, I and my family have logged some 2000 drive miles, seen a lot of cool things, had a lot of fun, and now it’s back to reality and all that goes with it. My family and I loaded up the car and trekked to Salt Lake City and various points surrounding it to show our kids many of the things I used to do and look forward to as a kid. My grandparents lived in Provo during the 70s, and due to that, we would head out to visit them twice a year for a week at a time. Subsequently, I have a lot of cool memories of the area, and I wanted to share that with my kids.

I’m also a realist. The idea of spending 14 hours in a car traveling is a long day no matter how you look at it. When we were kids, we had a station wagon with fold-down seats, so we would frequently put all the luggage on the rack on top of the car, put mattress pads and sleeping bags down , and we’d lay out, read, listen to music, sleep… you know, those things that people commonly did in the 70s before mandatory seat belt rules went into effect. In today’s world, DVD players are the norm with cars that are fitted with them. Ours is a decade old now and just shy of the in-car DVD boom, so we had to experiment and improvise. We determined that a cassette adaptor and a couple of 1/8” stereo adapter plugs would allow us to connect my son’s laptop up to the car stereo system, and they could watch their DVD’s without having to hover over the laptop to hear it. That and a car adapter to handle 120V AC, and we were good to go. I had a chance to hear a lot of movies on this adventure (of course, I couldn't see any of them as I was driving ;).

It’s an interesting thing when you don’t have the visual queues as to what’s happening on the screen, and all you have is the sound and the dialogue; your brain fills in the gaps. I’ve done this a number of times when traveling with friends that have DVD players, but I’ve been in the front seat. Many times what I come up with in my mind is totally different than what is on the screen. That’s because we can only “see” what we can hear. This was most amusingly pointed out to me as my kids were watching the movie “Click

” with Adam Sandler. For some reason, I had it in my mind that Tea Leoni was in this movie as Sandler’s wife (she wasn’t, that was the movie Spanglish

). So the entire time I was listening to the movie dialog, I had the mental image of Tea Leoni on screen. It was after the trip ended and I was picking up the DVD’s to be returned, that I realized that Kate Beckinsale was the actress planning Sandler’s wife. I recognized Christopher Walken’s voice off the bat, so I was able to fill in the gaps of his mannerisms and everything else I knew about him easily. Sandler is a character I know well, and he seems to play the same part over and over, so that wasn’t difficult either, but the mistake of the actress playing Sandler’s wife gave me a totally different image of what the movie would be in my mind, and the character's interactions.

In my testing efforts, much of the time, I am given a product or a feature where I know even less about all its inner workings than I do about this film. If with just my ears I could create a total flow of a movie with a totally different actress, what might I be doing when I am testing a product and I don’t have all of the potential information? Some testers may not be able to or have the ability to look at the underlying code. This can color the way that we test and what approach we take. This is not inattentional blindness (or at least not totally), this is really missing out on details that inform the user experience (the same could be said if we were to be able to view the film but turn off the audio and only have subtitles; yeah, we would see the images, and we would see the dialogue, but we might miss all of the inflection and the background sounds that inform the scene). Likewise, when we test, we should also be ready and able to ask “what am I missing, and is what I am missing something that has the potential to change entirely what I perceive to be happening?”
Posted by Michael Larsen at 6:00 AM