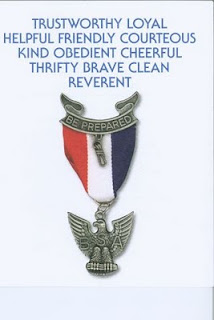 This is the first of a 12 part series. I’m curious to see where this leads :).


OK, the title is a little bit of a mis-nomer, but it’s something I’ve been considering for awhile now. As many of you know, outside of testing and raising a family, my single biggest time commitment is being a Boy Scout Leader. Over the past couple of years, I’ve seen and heard various presentations regarding a code of ethics around (teaching, development, testing, governance, fill in the blank). Each time I’ve heard or read these statements, I’ve caught myself saying the same thing… “If everyone just lived by the Scout Law, we wouldn’t need this patchwork blanket of ethics rules and codes of conduct”.


Well, leave it to me to shoot my mouth off, because someone actually took me up on it. So my “challenge” was to see if I really could map testing to the Twelve Points of the Scout Law. Thus, each day, I will talk about a section of the Scout Law and relate it to testing.


Note: these twelve points are those as defined by the Boy Scouts of America; while the Scout Law is similar in all countries that have Scouting movements, the wording is often a little different depending on the country.

Part 1: A Tester is… Trustworthy

When we talk about trustworthiness to scouts, it all boils down to integrity and being someone that people can count on. It’s number 1 in the Scout Law, and I believe it needs to be #1 in the Tester’s Law, too. At the end of the day, a tester’s integrity and credibility is their greatest asset, beyond domain knowledge, beyond tool skills, beyond bug-hunting acumen. Testers that are effective and are given the ability to really search ultimately have to be trusted by development and management. Lose that trust, and it’s very hard to get it back.


I like to encapsulate this with a quote from Larry Winget: “Do what you said you would do, when you said you would do it, the way you said you would do it”. Tester’s must be accountable, they must be willing to speak the truth, and they must be willing to own up when they make a mistake. They also have to stand their ground when asked to take a shortcut, or at the least, go on the record as saying “This is a shortcut. You realize we are missing key areas by not doing [X]”. Our credibility will carry us or it will sink us. The worst situation for a tester to be in is to be where they have lost their credibility and the development team’s trust. Safeguard it at all costs, even if it means making unpopular decisions or irritating people. I’d rather people know that they can count on me than worry about if they like me at that given moment.
Posted by Michael Larsen at 6:00 AM