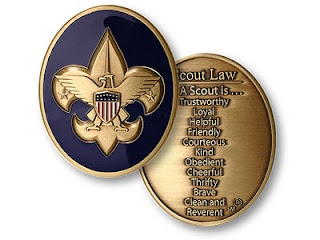 This is the ninth of a 12 part series.

My “challenge” now is to see if I really could map Testing to the Twelve Points of the Scout Law.

A Tester is… Thrifty

Thrifty is a topic that is popular today due to economic uncertainty. It's certainly much easier and much more palatable to discuss the idea of thriftiness when there are challenges as compared to when things are going swimmingly. when I talk about the idea of being thrifty with a scout, it is not only about the use of money, but also resources, time and talents. It's knowing when to get the most out of a situation without having to break the bank to do it. It's about earning ones own way and practicing good management skills to meet a goal. It's about building up a diverse series of talents and skills to draw upon so that there is always something one can do in any number of situations.

Testers, likewise, learn to be thrifty as well. For most of my career, I have not had the benefit of a large budget for purchasing tool or for getting training, or for building infrastructure to test with. Some situations have been better than others, but generally my test jobs have required me to be creative and stretch my resources and look often to places where expertise and knowledge could be received inexpensively if not outright free. Having this mindset has helped me embrace and learn to appreciate and work within the areas of open source tools, and to learn how to set them up, configure them and take advantage of what they have to offer. Virtualization has proven to be a blessing for testing, in the sense that many aspects of multiple machines can be set up on a few servers (or in my current environment and reality, one server).

While open source tools can provide a lot of benefit for low price, there is also a cost in tool-up time and learning, and sometimes that can be very expensive in the long run. To this end, understanding the value of commercial tools and what they can potentially save in the long run is also important. The "thrifty" tester wants to avoid, or at the very least minimize wherever possible, the triple specters of monetary debt, time debt and what has been described by many other testing bloggers as "technical debt". these are challenges that require discipline, and require focus and continual learning. A thrifty tester respects both money and time, and realizes that tools and scripts will not solve all problems. there is no magic bullet or special sauce that will solve all problems. testers must make choices all the time in where they will apply their efforts and how they will be most effective. Thrifty testers do what they can to maximize those efforts as efficiently and inexpensively as possible
Posted by Michael Larsen at 6:00 AM