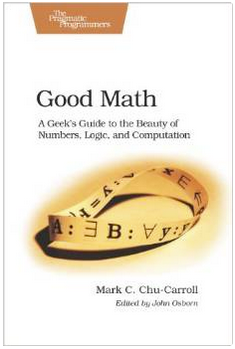 I am going to get this out of the way at the outset. Mathematics has often been a struggle for me. I managed to make my way through to my first semester of Calculus, and then I hit a wall. Having said that, I’ve always been fascinated with mathematics, and the history of how discoveries have been made always interest me.

Also, as a software tester, I often have to look at the calculations being made, and make sure they are right. For 90% of what I do, the math I have learned to date is fine, but there’s still that crazy rush I get when I look at higher order math, or math in areas I’m not familiar, and that door creaks open just enough for me to get a glimpse of something I didn’t understand before, or I feel I’ve come a bit closer to understanding it.

"Good Math” by Marc C. Chu-Carroll has proven to be very helpful in creaking that door and giving me a glimpse into things I thought I understood, but didn’t really understand. The subtitle of the book is "A Geek's Guide to the Beauty of Numbers, Logic, and Computation” and to be fair, the second two areas are the meat of the book. Yes, it goes into the classic popular numbers topics like the development of our numbering system, roman numerals, the discovery of pi, the concept of zero, etc. but it moves on from those pretty quickly.

Mark is the author of the "Good Math, Bad Math" blog. Many of the topics that are covered in this book (and many more that are not) can be read there. Those debates, and some of the confusion regarding different areas of math and computation inform much of this book.

Part 1 deals with Numbers, the one’s we are most familiar with, but also does so in a way that focuses on the rigor of mathematics to make the case for them. Natural numbers, Peano Induction, Integers, Real Numbers, and Irrational numbers get covered here.

Part 2 focuses on Funny Numbers, including the concepts of Zero, e, the Golden Ratio, and i (the imaginary number, what it does and what it means).

Part 3 focuses on the written numbers throughout history, including Roman Numerals, Egyptian Fractions, Fibonacci numbers, and the development of the arithmetic we so often take for granted.

Part 4 delves into Logic, or more specifically, the mathematical proofs that define logic. This section also covers ways of programming using logic and Peano arithmetic, with examples written in Prolog. Note: these examples are not comprehensive, but merely to give a taste of how to use the concepts.

Part 5 deals with Sets, and the variety of ways to look at sets in mathematics, including Axiomatic Set Theory, Models, Infinite Sets, and Group Theory/Symmetry.

Part 6 focuses on Mechanical Math, or Computation. Here is where the Computer Science aficionados may check out, but I was intrigued with clear descriptions of Finite Set Machines, Turing Machines, implementations of systems that are Turing Complete, and how Lambda Calculus is at the heart of the development of programming languages, especially Lisp and Scala.

As one who studied computers from an IT perspective rather than a CS perspective, I never fully got into the logical nuts and bolts of how computers really work. The sections on computation, as well as the sections of defining logic as a computer sees it, and in the strict notation of mathematical proofs, was fascinating.

Good Math is geared towards programmers, and is meant to introduce topics of higher math in ways that will help programmers understand how to implement the ideas, as well as to help them understand how computers actually go about doing what they do. Truth be told, for many of us who use higher level interpreted languages like Ruby, we can go a long way in writing code without ever being exposed to any of these concepts. There are several examples shown, but none worked out in detail. Again, that’s OK, as this is meant to be a survey book about mathematical concepts as relates to computing and logic, not a full blown course in how computer languages implement these models.

Bottom Line: If I were to suggest a core audience for this book, it would be to people like myself, people who have worked with programming languages, may even know a few cool tricks and have some system internals knowledge, but don’t have a strong foundation in higher math. Having said that, if you made your way through typical high school math courses, most of this will feel familiar and accessible. Some of it will feel strange, too (lots of symbols I’ve personally not used in years, if ever), but Mark writes about them in a way that makes them accessible. You still may find yourself reading various sections a few times. Well, I did in any event.
Posted by Michael Larsen at 8:32 AM