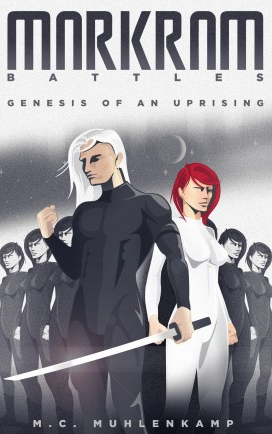 "And now, for something completely different!"

I am one for whom Dan Carlin's phrase "History has all but ruined fiction for me" rings true. I find that the real life exploits of historical figures, and the reality of their worlds, tends to make many aspects of fiction story telling, well, just not hold much interest. Fictional Mob Boss or the struggle for Alexander the Great's throne? Mythical marauders or real life Scythian warriors and their waves of descendants? Seriously, how can anyone top the Mongols, in fiction or elsewhere?

Still, there's a part of me that loves the "what if's" of both the near and distant future, with the possibilities, be they wondrous or terrifying, that make science fiction a place I enjoy spending time in. Added to that is my love of Role Playing Games, especially those that come from Japan (think the Final Fantasy series, Shin Megami Tensei, and Suikoden). Also, I love Animé series that look at the struggles of everyday people against overwhelming odds (think "07-Ghost" or "Gantz").  When something hits that sweet spot of all of those interests, and still focuses on the humanity of story telling, I pay attention. Add to that having an author of such material being a personal friend? Well, what else can I say? I want to share, and share I shall :).

M.C. Muhlenkamp is putting together a series of short stories that feel one part ancient Rome, one part Eurasian steppe, one part Japanese RPG and one part Young Adult dystopian struggle. Weave these all together and you get what is shaping up to be "Markram Battles". More to the point, "Markram Battles" takes a cue from the past, in that it is really a serialization. If you liked the idea of Alexandre Dumas publishing his "Three Musketeers" in small pieces, waiting to see where and when the next "dose" will appear, then here's an opportunity to do exactly that. 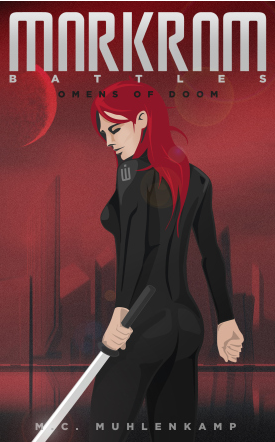 M.C. takes us into a word where "Earth as we know it no longer exists." In its place is an empire that looks to "recruiting" humans as "battle entertainment", specifically women. The rules of the battles are simple. Fight and win, or die trying. The story focuses on the interactions between the the empire of the Markram and the humans who are forced to play their game to survive. The first and second deliveries ("Genesis of an Uprising" and "Omens of Doom") focus on the interactions between Seven, a Unit Leader whose sole purpose is to lead recruits in battle, and Thirteen, an unwilling recruit who refuses to play the game, at least not in the way that the Markram want her to play.

The chapters are short and taut. The characters are believable even in their other-worldly space. Little in the way of useless exposition is given. The reader is expected to go with the story and figure out the world and its parameters without long winded explanations as to what has gone on before, except where it makes sense to give context to the situation. Even in the first short sections, you find yourself caring for the characters and wondering what will happen next, on both sides, Markram and human.

The cover sets the tone and the mood of the stories, and in this way, I can't help but feel drawn to parallels made in video games like "Shin Megami Tensei: Digital Devil Saga" or Anime like "07-Ghost", each with a fight to survive ethos and a shadowy "other" pulling the strings. The stories feel like they are designed for a YA audience, but don't let that dissuade you, as the themes and the stories focus are strong enough for all ages.

Bottom Line:
The serialization approach works well for this series. It feels like a Manga without the pictures, and that's meant as a solid compliment. Two issues in, I find myself asking "OK, so when will number three be ready?" If stories about human spirit and desire to not cave to the rules of an unfair system hit a sweet spot for you, give these stories a try. They are quick reads, and at $0.99 apiece, less expensive by far than a manga series, and every bit as engrossing and satisfying. Yes, MC and I are friends, but I'd dig this series even if we weren't ;).
Posted by Michael Larsen at 7:58 AM