I want to say thanks to Saron Yitbarek for kicking off this idea.

She suggested on Twitter (see hashtag #HealthyTech30) that we should check-in and report on things we are doing to help us be active and eat healthy because tech workers often just sit all day.


I wanna do a challenge to be more healthy + active, especially for tech folks since our jobs tend to be pretty sedentary.


To that end, I'm happy to kick this process off with the following: 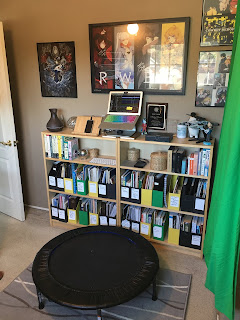 This is an interesting arrangement I came up with a few months ago so that I could have a standing workstation and add some movement to it. I have been a fan of using rebounding with various video games for years but a few months ago I decided to have a look at my work arrangement and see if I could work the benefits of rebounding. For those unfamiliar with what rebounding is, it's a miniature trampoline and the person using it can do everything from gently bounce on it to more aggressive jumping and running, as well as various balancing movements. Another nice benefit of having a rebounder is that it acts as a bit of a pump for the lymphatic system and it also helps with circulation. As a person with a serious bone-break almost a decade ago, the continued gentle back and forth really helps my lower right leg even today. Finally, unlike a treadmill desk, a rebounder is lightweight and easy to move if you need the floor space for something else (working out, yoga, stretching, strap movements, etc. More on that in future posts :).

Some daily food prep. In this case, we're talking juices. I have a Breville masticating juicer and I also have a subscription to Imperfect Foods. For those not familiar, Imperfect Foods (used to be called Imperfect Produce) is a service that sells "ugly food", or in other words, food that would not be deemed "sellable" due to cosmetic issues. Perfectly good food, just not "pretty" and I'm totally OK with buying produce that may not exactly square with grocery store pretty standards. After I cut and prep everything, it really doesn't matter as long as it tastes good. 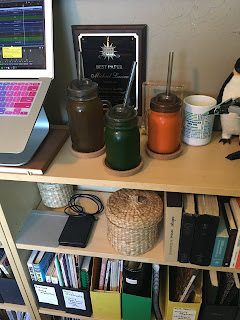 OK, so the second step to this is that I have a bunch of handled Mason jars with screw tops and straws. Each week when I get the bulk of my produce I take a bunch of it and I juice it. The resulting juice is super pulpy (which I like) and this means I am ingesting a good amount of the fiber as well. There is, of course, the leftover spent fiber that I typically freeze and use in other dishes. Waste not want not ;). I then put these juices into the jars and keep them in the fridge. I grab them for days when I'm not super motivated to cook a bunch and I just want to grab something and have it ready to go. In the mix today are:

- carrot and ginger juice (that's the orange one)

- kale, spinach, and zucchini (that's the green one)

- yerba mate made "terere" style (that the tall, dark one. I make that with a French Press, more on that another day :) ).

Tomorrow I will talk about some home exercise stuff, and maybe share some food options you can make with pomace from juicing :).