Late to the Party, Still Going to Jam: Day One, 30 Days of Automation in Testing 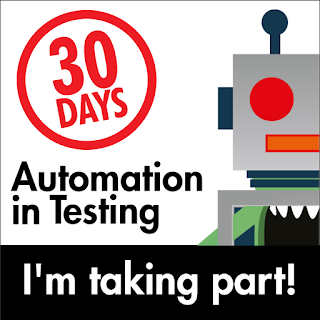 Regardless, I have decided I want to tackle this one next because I am knee-deep in learning things related to code and automation and retooling with a new stack and platform.

I'm in the process of learning how to navigate my way around Windows 10 on a Lenovo Think Pad, getting my bearings with Visual Studio, and playing with some of the finer points of C# and .NET Core. In short, it's a perfect time to take this on and perhaps augment a tectonic shift in a work environment with some additional skills to help balance it all out.

This is Day One of a Thirty Days Challenge, this time focusing on Automation in Testing.

The use or introduction of automatic equipment in a manufacturing or other process or facility.


That makes sense, in the sense that that is a natural sense of the word. Something done to make something automatic. Granted, it uses the word automatic, which comes from the Greek word automatos:  acting of itself. Thus when we think of automatic, and by extension, automation, we are thinking of devices and processes acting on their own behalf. thanks, Lexico :).

So let's take a look at Test Automation. What does Lexico have to say?

Interesting, and not really surprising, as it's not one word. Point is, there is no real dictionary definition for it. The closest thing we get is a Wikipedia entry (and yes, I'm a strong advocate of "caveat lector" when it comes to Wikipedia or any place else but there's nothing wrong with starting there and then extending the search. Wikipedia starts with:

"In software testing, test automation is the use of software separate from the software being tested to control the execution of tests and the comparison of actual outcomes with predicted outcomes."

Where did that come from?

Hmmmm... not trying to be critical here but a book selling the best practices of software management gets to define what test automation means? Am I the only one who finds that somewhat amusing?

OK, to be fair, test automation is still fairly new (though it is as old as any procedural programming steps, really, so it's been with us since the 1940s at least). Ultimately it comes down to the idea that we have machines and we want to control those machines' execution and determine something about those machines' control that goes beyond them just doing that thing they do. Sorry if that's a bit breezy, I never promised you peer-reviewed scholarship ;).

Seriously though, minus the snark, we are looking at doing a little more than repeat steps over and over. We're trying to determine a way that the steps being performed are actually being done right. thus, test automation goes a little bit beyond actual automation of steps to make a repetitive and repeatable process something a machine or pattern apparatus can do.

Posted by Michael Larsen at 4:12 PM