Agile Where Agile Fears To Tread! - a #PNSQC2019 Live Blog

Thomas Cagley is a fun guy to listen to in just about any situation. He's been a guest on The Testing Show and I've listened to his own SPAMcast podcast (SPAM in this case means "Software Process and Measurement" ;) ) but this is the first time I've actually listened to him speak.

Tom opens up his conversation with a word I will not even try to write out much less pronounce but it has to do with Germany's Strict Beer Purity Law that has existed since the Middle Ages in Bavaria. He then mentions that his wife is gluten intolerant and thus, because of that she cannot drink beer. She can, however, drink something referred to as a "tea beer". Is it "beer" in the classic sense related to the German Brew Law? No. Does that render the beverage irrelevant or not enjoyable? Not in the slightest :). I can't speak for the beverage in question and the idea of a "tea beer" absolutely intrigues me (I don't drink but I do find the concept fascinating).


The key point to this is that we are back to the lower case versus upper case "[aA]gile". As Dawn Haynes suggested that we should tear down the Agile Temple (granted, those are more my words than hers), Tom is discussing the idea that we can take elements of Agile that are helpful and we can use them in the places we want to without necessarily committing to a full-blown "Religion of Agile" 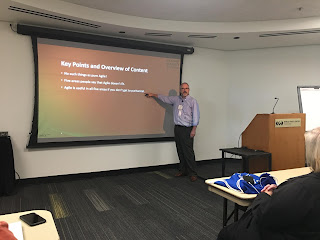 The goal of "agility" is to move more nimbly, to be quicker, to not have to do such heavy lifts, and be able to get the product out to customers faster and more frequently, with less risk. News flash, you do not have to adopt every element of the Holy Eucharist of the Agile Temple (wow, sorry if that sounds a little harsh but I'm picking the words for the vividness, not for the snark... well, not maybe a little bit for the snark). Basically, we're back to the Beer Law. If it's not [ABCDEFGHIJK] then it's not Agile. Well, OK, maybe we can't do [ABCDEFGHIJK] but what if we were able to do [AEFGJK]. Do we just throw up our hands and say "nope, can't do just those, that wouldn't be Agile". Sadly, there are people who do say exactly that. I'm a fairly polite fellow and as such I will not call these people what they richly deserve to be called (hint: it rhymes with "boron").

As smaller components are implemented and benefits are seen what is likely to happen? The other elements will either fall into place as a matter of course or they can be introduced as needed and improved upon as the team gets better at what they do.
Posted by Michael Larsen at 1:31 PM