Testing in the Golden Age of Quality - a #PNSQC2019 Live Blog

Jennie Bramble and I have joked a couple of times today that with her giving two talks (one totally impromptu because a speaker went MIA) as well as running the Panel Discussion for
"Testing in the Golden Age of Quality: Where are we and where are we going?", we should just change the working name of PNSQC 2019 to "The Jennie Bramble Show" ;). 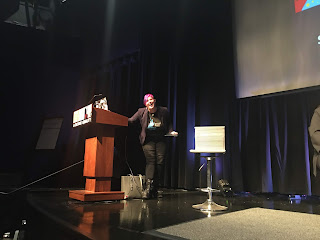 Anyway, we have a wonderful panel including  Carol Oliver, Nermina Avdic, and Mallory Brame. We are chatting about "the world we live in and life in general" (and bless you if you actually get that reference, though it may indicate you are at least my age ;) ). Quality is at the forefront of software decisions now more than it ever has been. There have been huge strides in tools, methodologies, and areas that software testers and testing can get involved with. Not bad for a career that was considered "dead" ten years ago (and yes, that "dead" is in huge air quotes and I get the original context, don't get at me (LOL!) ).

Some areas that have been discussed:

- How has the proliferation of tools and paradigms helped the software testing landscape (answer: it has, a lot!)

- What sort of skill sets might we look for in someone interested in security testing? It starts with the code review and then we need to be able to consider attack vectors based on the code used. Security Certificates like CISSP are also helpful but not easy to get. 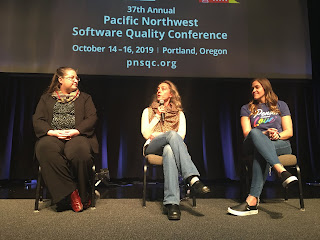 - How do we show the best value to our clients and how has that changed? By helping move the process along, by helping test early, identifying paths that would be good automation candidates, showing that early testing makes for easier to fix bugs and that pairing can possibly prevent bugs in the first place, thinking of areas developers wouldn't have considered to test.

- Advice for how to communicate with devs to take bugs personally? Have a conversation around the proof of the issue, try to find common ground, it's possible both groups have different understandings,  realize that pushback is natural but being able to support with evidence goes a long way, don't think in terms of "I'm right, you're wrong, shut up!". Unless you're Eugene Lee Yang, then, by all means, go ahead ;).

- How does your company treat bugs such as bugs in production vs. bugs in regression? If the bug is not easily discoverable, we may defer but generally, we will do what we can to fix them. Customer anger may tip the scales ;). Ask the question "so, what would happen if a customer actually did find this?"

- In this Golden Age are we still numbers-driven or is that changing? Jennie steps out of moderator role to say that numbers are a terrible rubric for validating quality because numbers can be gamed so easily as to be effectively meaningless. Fewer numbers, more morale-driven and skills-driven. The numbers will still be present but expect to see we are moving away from it.


Questions that didn't get covered. Any chance readers might want to follow on in the comments :)? If so, sound off!!!

What are the practices for high-value test automation?

What makes automation valuable in the right now and what will it help us achieve in the future?

What methodologies are most prominent right now?

Are we doing more exploratory or ad hoc testing as opposed to test cases and scripts?

Where does QA fit into the life cycle?

How can we move around the SDLC and create value in new places?

What are ways that companies are thinking quality first and what can we do to influence that?

Where do you see QA/automation moving in the future and do you like what you see?

How can we make an impact on the future, share ideas and come together as a discipline?

Should we bleed more into development, for example, testers fixing defects, and is this something you do at your job or would embrace?

How can we make the golden age of quality last?
Posted by Michael Larsen at 3:16 PM